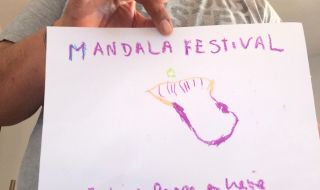 We’ve heard and seen it all, 3 year-old DJs headlining stages, 11 year-old producers receiving widespread acclaim, but now, youngsters are designing festivals in their own right.

Marcel Mingers is the founder of Extrema, one of Holland’s original festival organizers, and he’s been throwing events since 1992. So when Mingers’ 4 year-old daughter drew a picture along with the words “Mandala Festival. For Julia and Papa and sweet people,” he knew exactly what to do. World’s best dad? We think so. Sure, it’s a simple drawing, but Mingers felt compelled to make his daughter’s imagined wonderland a reality. And because of this unlikely origin, Mandala is drawn from an entirely different vision than what we’re used to.

Mandala is an organically grown dreamscape, completely thought up by artistic creators, volunteers, and all you sweet people. The community itself is set to flourish with music, art, games, workshops, sports, yoga, wellness activities and loads of colorful entertainment.

But the biggest difference? No massive stages.

Instead, there will be natural gatherings amongst 13 uniquely themed tribes. Already, the concepts behind seven of the tribes have been announced, and each week will see the release of more details surrounding this ambitious concept.

Like Shambhala or Envision Festival, there is no barrier between the campgrounds and festival grounds, leaving patrons free to camp where they please and dance where they wish. Hundreds of acres of luscious green country, complete with a beach, a pool, and vast reaches of enchanted forest with secret tree houses.

Being a family-oriented festival, those with children will have the option to stay on a separate campsite, and there’s even the option to stay in luxury lodging or teepees. The festival also aims is to recycle or upcycle all waste created from the event.

As a pretty out-there guy myself, this sounds like the perfect merge of childhood’s abstract optimism and adulthood’s capacity to execute such a creative design. For more information on tickets, the concept and how to get involved, check out Mandala’s official website.

“Imagine going on a short holiday in the middle of nowhere. You enter a park surrounded by a big forest. A park with a beach, a nature pool and a temple island only reachable by self-made rafts. There’s music on the beach and pop-up parties in the forest. No massive stages, but a gathering in nature with 13 different tribes. Music, art, games, workshops, sport, wellness and loads of colourful entertainment. All created by artistic ‘Creators’, their friends and you – the crowd.”

This article was first published on Your EDM.
Source: 4 Year-Old Designs Music Festival, Father Makes It A Reality