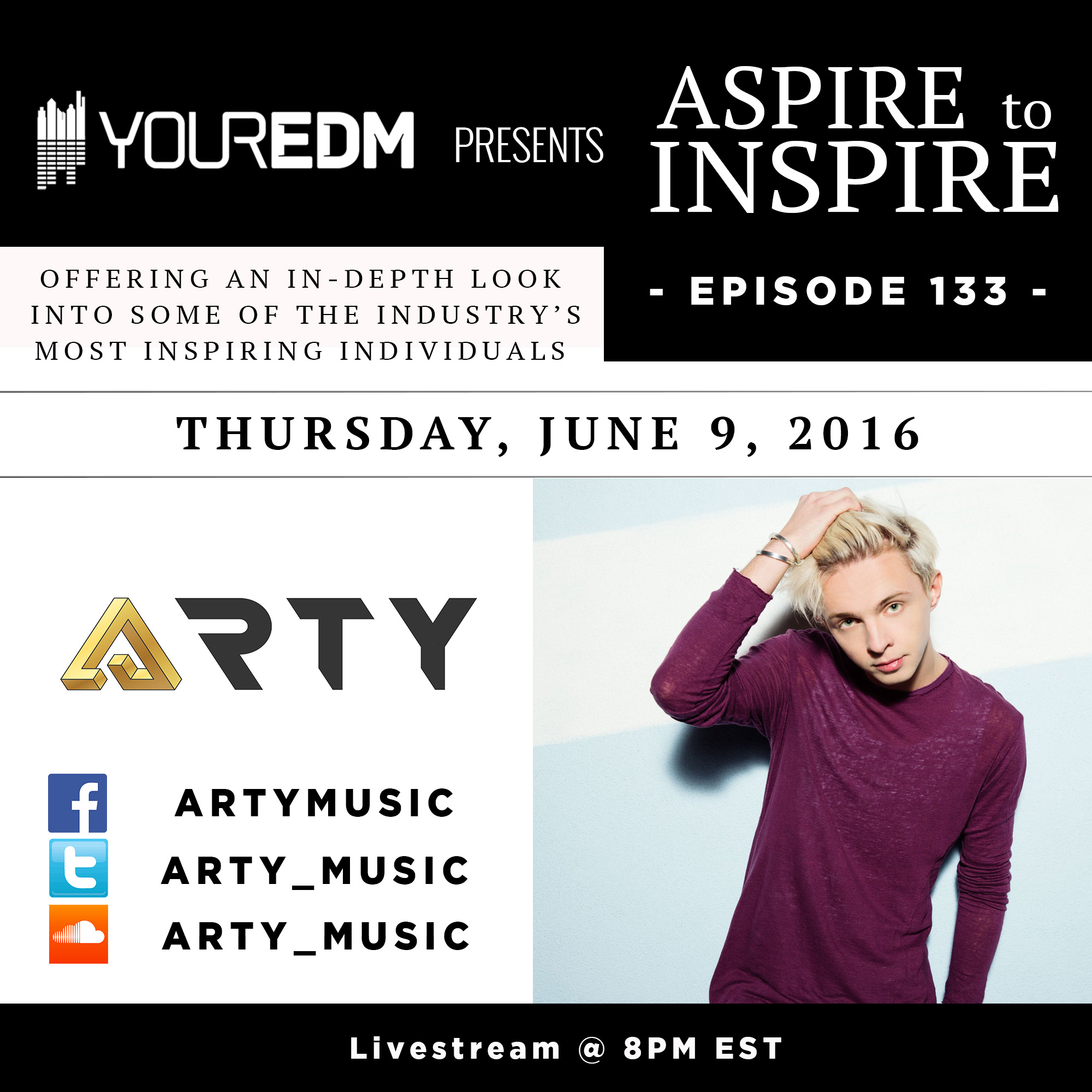 While many of us assume that a DJs path to the top is similar to that of their colleagues, that road can sometimes be impossible to navigate. We take advantage of how easy it is for someone to not only make music, but to share it with friends and send demos to their favorite artists. But what about 15-20 years ago, when the world wasn’t so connected by the Internet, when dance music hadn’t reached to every country like it seemingly does today?

Growing up in the small town of Angel, Russia, Artem Stoliarov, aka Arty, did not have the same access to music and the Internet that many of us had growing up. And unlike Europe and the US, music didn’t spread so easily to his part of the world, making it difficult to discover different subgenres and get a proper introduction into the vast world of dance music. Without resources like Soundcloud, YouTube, or even iTunes and record stores, Arty had to get creative about how he obtained his music, relying on his network of friends with reliable internet access that would share coveted burned CDs of selected UK house, specifically The Chemical Brothers, The Prodigy, and others.

In addition to having difficulty procuring music, Russia’s nightlife scene was not a breeding ground for DJs. Unlike scenes in London, Amsterdam, and Paris, Russian clubs were more focused on Top 40 pop hits from homegrown artists since foreign music wasn’t readily available. Because of this, Arty’s first DJ gigs as a teenager were in unconventional places like coffee shops. While it might not seem like an ideal spot, it actually gave him the ability to experiment with different styles, as coffee shop patrons were more open-minded than clubgoers. Regardless of these two major setbacks, Arty never lost his vision, and never used either of these challenges as an excuse to quit.

Arty spent a vast majority of his childhood in front of a piano, as he attended a prestigious music school for seven years and performed in festivals across the country. As one would expect, an exceptional amount of time was needed to reach a professional level, meaning he had to skip hanging out with friends in order to practice for 7-8 hours per day after school. When the program completed before high school, Arty had grown to hate playing piano so much that he asked his parents to sell the one they had in their home, so he wouldn’t be reminded of all the sacrifices he had to make because of it.

Like any normal teenager, Arty had to obey his parents’ wishes, especially when it came to school. Though he was taking more of an interest in DJing in high school, he still had to go to university, and chose to pursue a degree in mathematics. Right as he entered his fifth year, his career picked up, and soon Arty was included in Armin’s ASOT 500 tour. With difficult certification exams ahead, he was faced with a choice – leave school or cut back on touring. Arty chose the latter, and made sure to not book any shows that would interfere with studying. He had too much respect for his parents and their desire for him to finish school to drop out so close to the end.

With the freedom to continue music and the full support of his parents who witnessed the fruits of his labor, Arty pressed on, but still without real guidance from those in the music scene. He found a fast friend in fellow DJ, Alexander Popov, who advised him to skip getting signed by Russian labels and look into European labels like Armada and Anjunabeats. He also became friends with other Russian DJs who broke into the international scene like Matisse & Sadko, Hard Rock Sofa, and Swanky Tunes. Like Arty, they all overcame the same difficulties of a stagnated music scene in their home country, and they still support each other’s careers to this day.

While a move to LA seemed obvious, the reason behind relocating was much more personal than strategic. Traveling to and from Russia was an arduous process, one that took 3-4 flights over the course of just one day. Not to mention, climate changes were severe, and paired with a dangerous lack of sleep, his health began to severely decline. During his heaviest season of touring, Arty had to cancel shows more than once, as he wasn’t strong enough to travel. Los Angeles was not only good for his health, but it also allowed him to be close to his record label and the vocalists he needed to create his album. Still, he misses his family and friends, and never passes up the chance to return home, but to reach the next level in his career, relocating to the states was mandatory.

Arty’s main goal has always been to put as much of himself as he can into his career. All the successes he’s had up until this point – a record deal with Insomniac and playing at major events like ABGT 050 – were products of his strong work ethic. He tracked down record labels and sent his demos to anyone who would listen, he taught himself how to produce and DJ, and is now learning how to play guitar on top of already knowing an instrument. Any free time he can get is focused on constantly improving. From anyone on the outside looking in, one might even say that he’s a workaholic, as he’s always working towards a short-term goal he has set for himself. It created an internal competition that motivated him, but he never let it overtake the passion he has for the music.

His latest album, Glorious, serves more as a statement of Artem the person, than Arty the musician. Given the freedom by his label to make the music that he wanted, Arty spent about 1.5 years building a debut album that was the sum of his life up until its release. While some artists stress that every track has to be a commercial success, the money and the fame has never been a driving force behind his music. Instead, Glorious was made to be a journey of the music that inspired him, a body of work he hopes that will inspire others to do the same.

If you want to get a more in-depth look at Arty’s determination to pursue music as a career, enduring the tiresome tour life, and his desire to maintain authenticity, then we invite you to tune in to Aspire to Inspire Live TOMORROW (Thursday) at 8pm EST. Have questions for Arty? Tweet #ATILive throughout the stream!