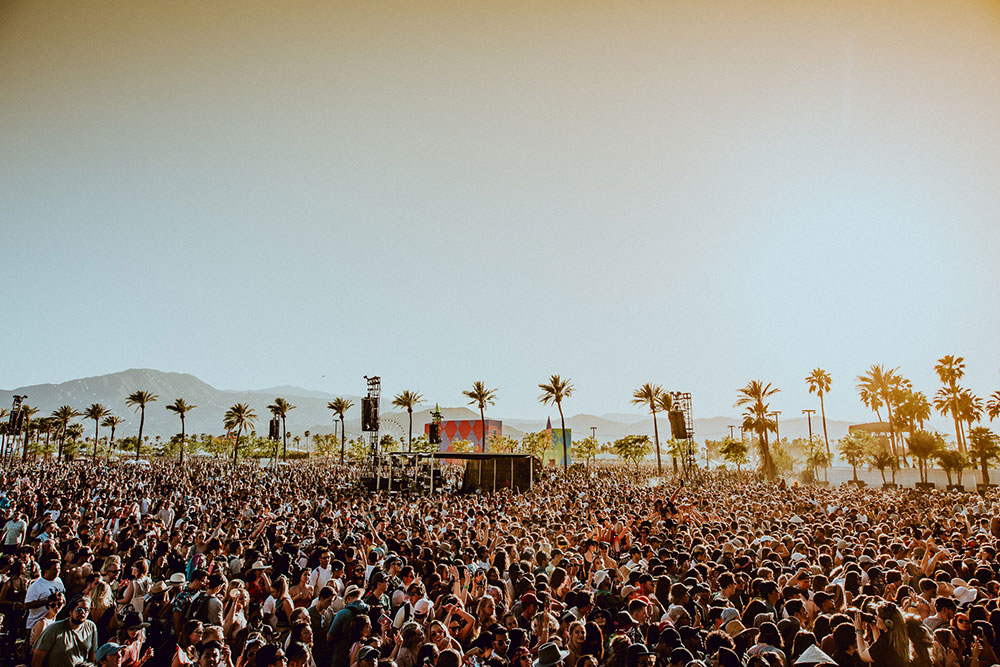 
America’s cornerstone music festival is fast approaching its Empire Polo Club descent. As Coachella Music Valley Music & Arts Festival enters its 19th annual celebration, the festival reflects on music’s past, relishes in its present, and amplifies its future. It’s an exuberant apex promising the land of milk and honey for its frenzied fashion frolickers and music aficionados alike.

Those that secured passes this year conquered its fastest selling edition on record despite having endured a price hike. This year sees the Goldenvoice brainchild packing punches and taking names as per usual. Rock ‘n roll’s presence has dwindled, giving rise to rap, pop, and R&B. Beyoncé, The Weeknd, and Eminem are headlining. In the electronica arena, rising acts like Louis the Child, Alan Walker, AC Slater, Petit Biscuit, Whethan, Cash Cash, and San Holo are carrying the torch of a new era of radio-friendly, pop-centric dance music, which Coachella’s clearly noticing based on their booking choices.

We here at Dancing Astronaut have taken to compile a complete list of acts we deem unmissable ahead of the gathering’s first weekend. By now the set times have dropped and there are inevitable conflicts, but these acts are among the most exciting debuts, performances, and compasses for where dance music has been and will shift in the years to come. If a cosign from Skrillex doesn’t entice you, perhaps it’ll behoove you to know that the OWSLA signee Ekali sold out his Babylon tour through December of last year. Maybe you’d like to know that the trap maven moves through genres with ease, having collaborated already with TroyBoi, Denzel Curry, and KRANE. Last year, he released a huge collaboration with Zhu and dropped a wide range of mixes, including his three-hour-long Awakening mixes, a Diplo & Friends mix, and a Triple J mix. Ekali became a household name in the dance community in 2017, and accordingly, DA named him one of the producers of the year. This year, he’s moved from his 2016 DoLab performance slot to an afternoon slot in the Sahara tent and if that isn’t an impressive testament to his own, and a rising class of new dance acts’ versatility, growth, and impact in the modern dance realm we truly don’t know what is. Nineteen-year-old Mehdi Benjelloun, known musically as Petit Biscuit, has already proven his music production talents are well beyond his years. Classically trained in the cello by the age of five, Benjelloun’s monumental remix of ODESZA‘s “Memories That You Call,” drew comparisons to the duo with a refreshing injection of poise. Not to mention, Petit Biscuit wrote, produced, and mixed his debut album Presence over the course of the last year, somehow finding a balance between high school exams and sold-out tours across the world. Petit Biscuit’s Coachella debut is a testament to a new class of classically trained electronic musicians. May there be plenty more to come. Just last year, Kölsch ran through a slew of high profile festivals, had a stellar BBC Radio 1, an Ibiza residency at one of the island’s most renowned new destinations, played the iconic DC 10, Berghain‘s Panorama bar, and performed on the Eiffel Tower for five million people around the world. With both ease and great comfort, Kölsch’s sets implement an articulate understanding of his surroundings, and though Coachella 2018 marks his debut at the festival, his ability to read the room will surely see that he delivers here and for the rest of the world in the months to follow. Dirtybird head honcho Claude VonStroke, also known by his hip-hop alter ego and real name, Barclay Crenshaw, is elevating one of dance music’s mightiest messages. As the founder of the Dirtybird Campout, Crenshaw’s proven the Dirtybird flock is much more than a tantalizing tech house home base, but an embodiment of the true meaning of dance music. He’s bringing the tribe back to the dance floor and proving that love and passion, for music, but more importantly for one another, will see it all through. One could argue that a Chromeo set in 2018 is outdated. But, that would be to ignore the duo’s immense cultural permeability, not to mention their timelessness, and an ultimate ushering in of contemporary disco music. Chromeo’s releasing a new album in June. For now, they’ve released a new bop with D.R.A.M and renowned Prince and D’angelo collaborator Jesse Johnson for what appears to allude to their grooviest album yet. Their Coachella set will undoubtedly feature a plethora of classics and new material alike, and you’d have to be crazy to miss that. Keeping current and experimental with underground techno bookings proves to be no easy task. This year, Coachella’s dance bookings cater to the techno heads — see Maceo Plex, Chris Liebing, Joseph Capriati, and more — while simultaneously paying respect to the birthplace of the genre with the booking of Detroit Love. Detroit Love is a trio comprised of dancefloor experimentalist and top Detroit techno producer Carl Craig, Kyle Hall, and Moodymann. Ultimately, it’s small wonder Goldenvoice looked to this crew. If any group were to lay siege on the compelling concoction that is Motown, jazz, and techno, there would be no better choice than these homies from the “D.” In the era of #MeToo, where women are speaking out against their oppressors, The Black Madonna uses her music as a means to amplify the voices of the fringe dance community. Her sets raise up the central voices of club history — ones that have been forced to the periphery or silenced entirely — through a provocative exudence of acid house, disco, and outright emotion.  Her music seeps groove and love that’s made to replenish the soul. Peggy Gou is going to be here for a long time. Having graduated from the underground circuit with the highest honors of club-polished sounds in 2018, Gou brings forth sets that are a dynamic testament to her compelling curation and outpouring love for the craft. She wanted to the be the first female Korean DJ to play Berghain, which she was, and along the way she also became the first female Korean DJ to play BBC Radio 1‘s Essential Mix. Now, her Coachella debut solidifies that her electrifying electro and disco will only perpetuate her meteoric rise to stardom. Alison Wonderland is speaking her truth. She’s just released her exquisite sophomore album, AWAKE, which is a compelling collection of EDM and hip-hop crossovers. From rappers to Grammy-award winning songwriters, Alison Wonderland is successfully holding the attention of her listeners, while offering one of the most refreshing perspectives of women in the genre’s history. It’s rife with sarcasm, and yet, poppy in its deliverance. The album sees Wonderland wielding her moniker’s trope as a weapon with ease, and it’ll be no surprise if she’s a household name come the end of the year. Considering how much the EDM world is a man’s microcosm, at least onstage,  the very presence of Alison Wonderland’s perspective tends to come off as a revolutionary, dare we say, awakening. Dancing Astronaut named REZZ 2017’s producer of the year, “The prodigy who exceeded all expectations,” we called her. And yet, to reduce REZZ to our expectations, in hindsight, feels wrong. She’s an artist. Mercurial and acting on her own unique vision. She’s promoting the consumption of water during her sets, like many, she’s working on the little things, improving her jumps during her sets, and she’s taking on the world. As the Coachella set times were looming we began to wonder if the outside world had caught up, whether it was ready to recognize Isabelle Rezazadeh’s global ascension. Having ripped into the scene three years ago with an unparalleled juxtaposition of industrial techno and pummeling bass,  REZZ carved an unforeseen niche in the mines of ominously-sinister, singular techno, and now, the world has taken notice. REZZ will close out the Sahara tent on Friday and the world will be watching. There are no doubts REZZ will continue her momentum into superstardom after this performance, and continue to exceed our expectations, but it’s probably time we let go of those and let the Space Mom do her thing.