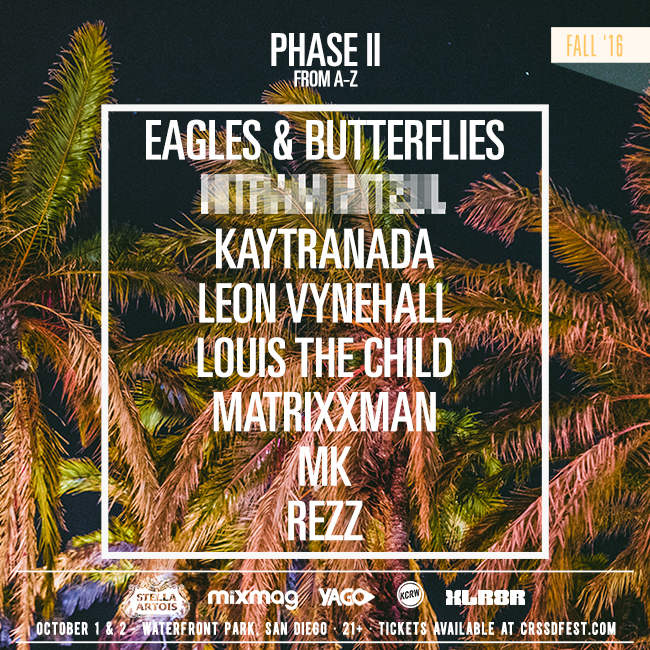 CRSSD Festival has debuted phase two of its October 2016 lineup, adding even more world-class acts to its industry leading billing of Electronic’s finest. This bayside San Diego spectacle welcomes this fine collection of forward thinking artists to the iconic Waterfront Park October 1 and 2.

CRSSD has continued its legacy of bringing together forerunning electronic sounds and styles from across the globe with its curation of the Fall festival. Joining an already stellar lineup is a genre transcending set by Kaytranada, House legend MK, Ninja Tune mainstay Leon Vynehall, UK Tech-House specialist Eagles & Butterflies, modern Techno pioneer Matrixxman, and standout performances by the rapidly rising Rezz and Louis The Child.

Exuding the laidback yet culturally rich energy felt in its Downtown San Diego home, CRSSD festival welcomes its attendees to a grassy waterfront oasis complete with ocean sunsets and splash friendly fountains. It remains this utterly unique venue coupled with ahead of its time musical curation and jam-packed After Dark programming that makes CRSSD one of the most talked about festivals in North America.

CRSSD has also continued its partnership with Andaz Hotel in downtown San Diego to offer its staple day into night party then unwind atmosphere with block room packages available with access to exclusive CRSSD After Dark parties included. CRSSD has also once again partnered with Stella Artois as the official alcohol sponsor of the event.

CRSSD Festival features a craft beer and mixology program along with locally curated food vendors from some of San Diego’s finest restaurants. CRSSD is a 21+ festival. This article was first published on Your EDM.
Source: CRSSD Festival Announces Phase 2 Lineup For 2016