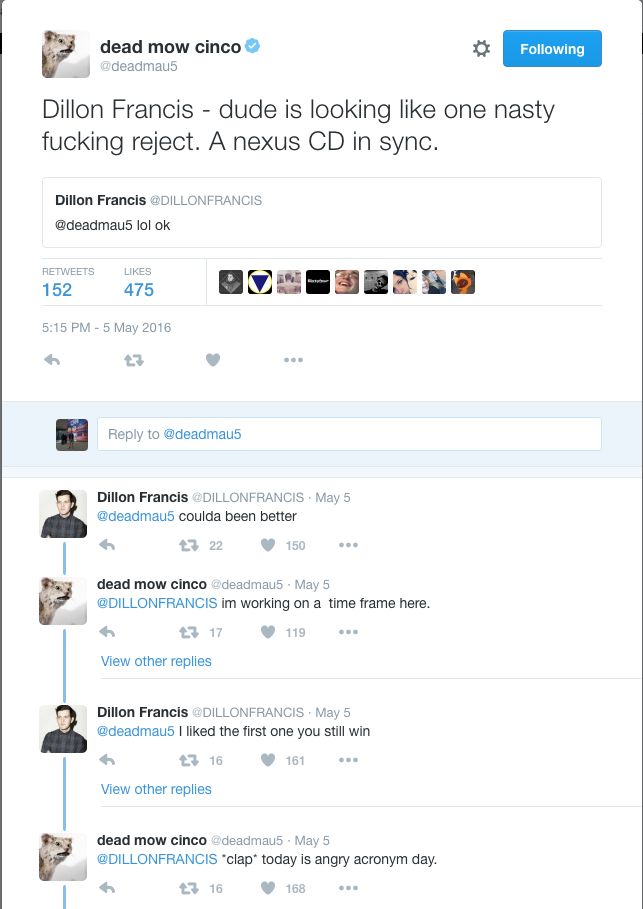 Late last week, Deadmau5 took to Twitter to deliver an unprecedented string of acrostics that broke down the names of what seemed like hundreds of DJs and music-associated entities into harsh phrases and insults. He took follower requests for hours, and turned the esteem of some of dance music’s most notable acts into his own target practice. From Martin Garrix to Krewella to Steve Duda to Ableton, no one was safe against the wrath of his 140-character roasts.

Now that the just has settled and the EDM community has caught their breaths, we’ve gone back through the muck and collected some of the most memorable artist responses sent out during the rants. Alison Wonderland, Excision and Tommy Lee each retort with a Deadmau5 acrostic of their own, while those like Madeon and John Dahlback just enjoy the fanfare.

Check them out below, and stay tuned for the hopeful return of #acromau5.

@deadmau5 Love and comprehension from me

@OfficialRezz lucky you hae two z's in your name. I struggled on zebra zippers. This article was first published on Your EDM.
Source: Deadmau5 Goes On Hilarious Twitter Roast, Here Are The Replies