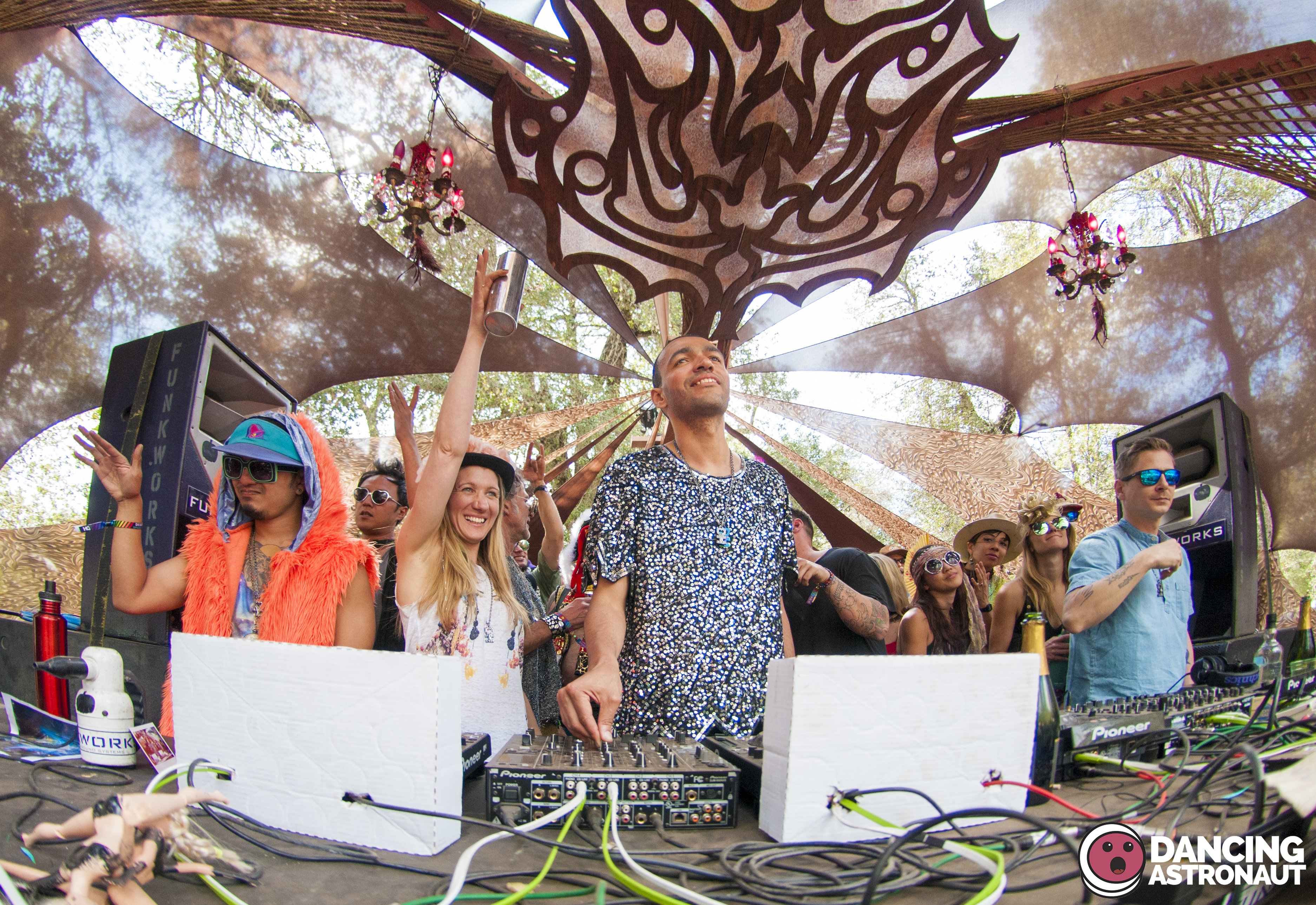 Desert Hearts, the transformational festival organized by the five-person crew of the same name, is now in its fourth year (after celebrating its three-year anniversary in Desert Hearts’ fall edition last November). The Desert Hearts crew gathers biannually at the starkly beautiful and utterly remote Los Coyotes Indian Reservation outside of San Diego, curating weekends guided by their sacred mantra: “House, Techno, and Love.” Especially in Southern California, where the cultural (and physical_ climate means there are many transformative experiences to choose from, Desert Hearts continues to set itself apart as an entirely unique festival brand.

With attendance totaling 3,500 attendees, Desert Heart’s single stage leaves plenty of room for the whole festival to gather. The maxim “meet me at the dance floor” was in this case quite possible. The physical stage, an ornate, wooden structure, put the DJ nearly at eye-level with the attendees in the area. The principle of interaction governed the design of the area as there was much more to look at than the artist performing. Platforms of different levels dotted the dancefloor, art installations stood close by, and various areas around the perimeter encouraged wandering. The intimate size of the festival — both in location and in attendance — ensured a natural flow of movement throughout the day and night.

72 hours straight of house and techno

One major draw of festivals outside of city limits and off public land is that noise restrictions can be nearly non-existent. While festivals make different use of this freedom, Desert Hearts does what few others do and schedules performances from noon on Friday ceaselessly until the crew’s signature closing set Monday at 2pm. Musically, the sets are classified within the confines of house and techno, but each artist tailors their two hours as a unique soundtrack for that time of day.

Jozif’s 2pm house, for instance, set packed the dancefloor in minutes on Saturday, while Desert Hearts crew member Porkchop brought the bass to his midnight performance, injecting the crowd with a palpable energy that took them through the morning. San Diego’s Justin Campbell took over the decks at 8am, infusing his sunrise set with funk-inspired rhythms. Impressively, the dancefloor appeared at least half-full 24 hours a day – an indication of the dedication of the festival’s attendees.

One wristband, one Desert Hearts

Festival-goers received their wristbands at check-in, and unlike most events, they could be sure that everyone was receiving the same treatment. Artists, media, production staff, and general festival attendees each received a simple wristband, which read “Desert Hearts Festival Spring ’16 VIP.” Inside the festival, there were no exclusive artist or media areas, no VIP sections, and no amenities granted to some but not all. A true sense of community was fostered by this policy – everyone present at Desert Hearts had access to the same truly unique experience.

Curated community throughout the festival

A singular wristband was one of many efforts that Desert Hearts put forth to reinforce the festival’s emphasis on inclusion as more than just a talking point but a living, breathing ethos. Every festival attendee received a limited-edition pendant, bearing the festival’s logo, unique to this edition of Desert Hearts. Meanwhile, the beloved Pile Palace, lined with couches, stacks of pillows and piles of blankets, offered a welcome respite for those with legs aching from hours of dancing.  Located adjacent to the festival’s stage, Pile Palace provided a central meeting point for groups and a natural forum for forging new connections.

At Desert Hearts’ third-year anniversary five months earlier, a spontaneous wine and cheese party overtook the dance floor — one of the more memorable takeaways of the weekend for those who happened to be present. The moment could have been relegated to a one-off experience, but those committed to Desert Hearts made sure that the whimsical tradition not only returned, but went off without a hitch. For attendees back at the spring edition, the wine and cheese party was a light-hearted confirmation of what they already knew about the festival. For those there for the first time, however, the idiosyncratic experience — the way it materialized, and just as quickly vanished — was almost surreal.

Cars lined the exit on Monday afternoon, returning contentedly exhausted revelers to their real lives elsewhere. With new pendants and memories in tow, first-time attendees and repeat returners alike left with a lasting impression of a truly special weekend from the Desert Hearts crew.