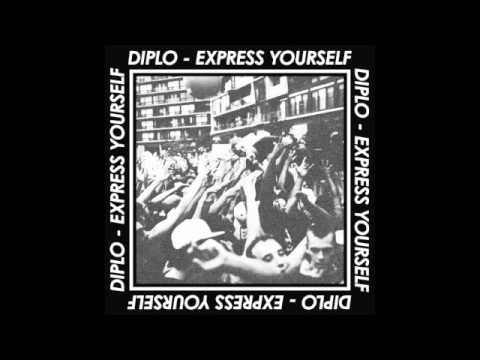 The unbounded, genre-mashing DJ, producer and industry juggernaut, Diplo, is excited to announce the June 12th release of the Express Yourself EP on his label Mad Decent. The six-track recording from the man who makes up one half of the bombastic duo, Major Lazer, is his first solo release since 2004’s Florida and is a product of the artist’s fearless endeavors of exploring and unearthing new music from around the world. Spastic freak-beats tie the recording together but genres present span from Dancehall to New Orleans Bounce to EDM. The EP features a laundry list of exciting collaborations, from dubstep superstars Datsik and Flinch to Dancehall pioneer Elephant Man. Each artist brings something exciting and new to Diplo’s wild productions. The EP’s title track and Diplo’s first foray into the maddening beats and booty-popping sound of New Orleans Bounce has close to 900,000 plays on youtube and radio play across the US.