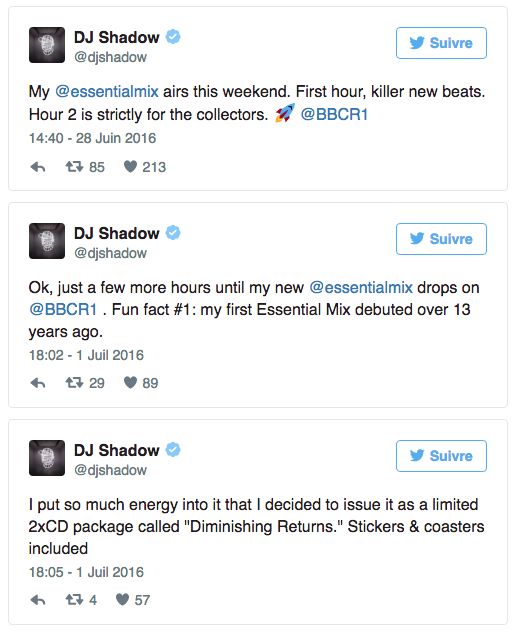 For his second effort, Shadow divided his mix into two hours. The first, featuring “new beats, new ideas,” was recorded just after the producer finished recording his latest LP The Mountain Will Fall.  Shadow dedicated the second hour to the “hip-hop fanatics,” claiming it featured “music very dear to [his] heart that is heretofore unknown.” Considering the prolific mixer is as well known for his crate digging as his original music, that’s likely true. His personal record collection boasts around 60,000 vinyl editions and of course, the show’s usual “tracklist” section is notably missing from the mix page.

Host Pete Tong paid lip service to the legendary DJ saying: “This week, we bow down and recognize…” before calling the show “a signature mix where brand new material meets some extremely, and we mean extremely, rare music from the vaults.”

Shadow took to Twitter to give both shows some context and provide his hopeful outlook on music of the past and present.

Stream the Essential Mix in full on the BBC Radio 1 website.