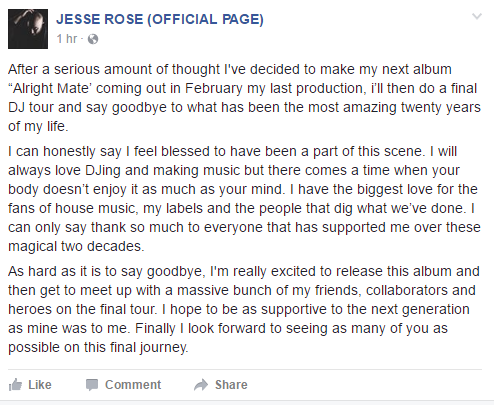 Jesse Rose’s newest album Alright Mate will be released in February, and sadly, his career in the music industry will be coming to a close afterward. After over 20 years spent full time as a DJ and producer, the British house veteran came to the difficult decision after “a serious amount of thought,” according to his announcement on Facebook.

His career won’t end terribly abruptly though. Rose plans on taking an extensive goodbye tour in celebration of his final album prior to retiring, where he’ll “meet up with a massive bunch of [my] friends, collaborators and heroes on the final tour.”

The DJ/Producer has been a fixture in the British club scene since the early 90s, having made the leap into the electronic career path in 1997 after moving to London and impressing his crowds with his brand of retro-influenced house and techno. Alright Mate will be his fourth LP.