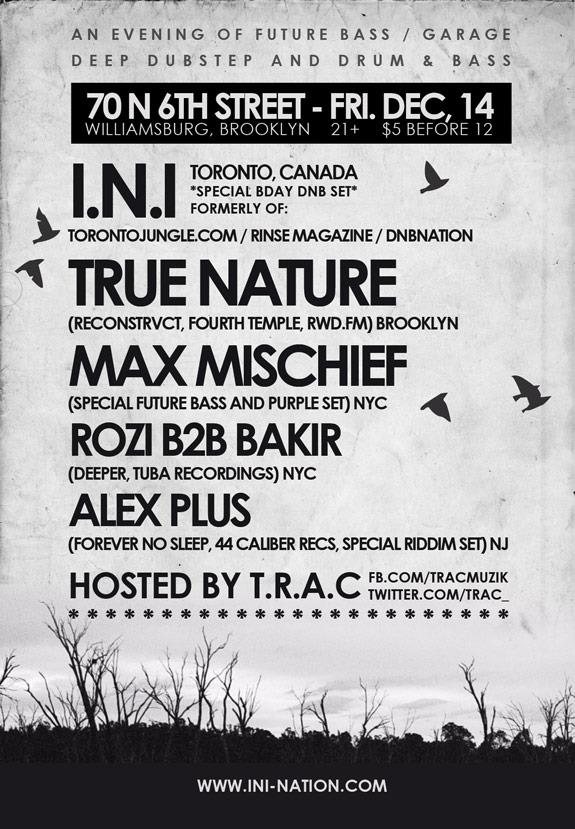 I.N.I has been DJing since 1999 and had established himself as a driving force of innovation in the neurofunk Drum & Bass scene throughout the early 2000s, putting out legendary studio mixes. These bodies of works featured neurofunk heavyweight exclusives from artists such as Corrupt Souls (Impulse and Telemetrik), Mayhem, Noisia, Misanthrop, Kiko, and also helped to expose under exposed artists such as Desimal, Mav, and ASC.

His mixing style was unique and influential throughout the scene. He blazed his own path, combining the sounds of warm ethno dub, downtempo, minimalist IDM and abstract/ambient film scores into his mixes/sets, creating deep, captivating soundscapes.

He also helped supply the Toronto scene with plenty of vinyl and support via Play De Record, one of Toronto’s seminal record shops for drum n bass / jungle, techno, house and hip-hop. He worked there in the early 2000′s, running their dnb/jungle department.

I.N.I cut his teeth in his early years in Toronto, Canada, working as videographer/producer, designer and DJ for the world famous TORONTOJUNGLE.COM, covering and promoting many of Toronto’s MASSIVE drum n bass events. During it’s prime, Toronto had long been known as having the largest Drum & Bass scene outside of London, England.

With their amazing set of local talent, consisting of a crew of photographers, designers, DJs and writers, the Torontojungle crew eventually took the next step by producing and internationally distributing RINSE MAGAZINE, known by many in the drum n bass, breakbeat and bass culture.