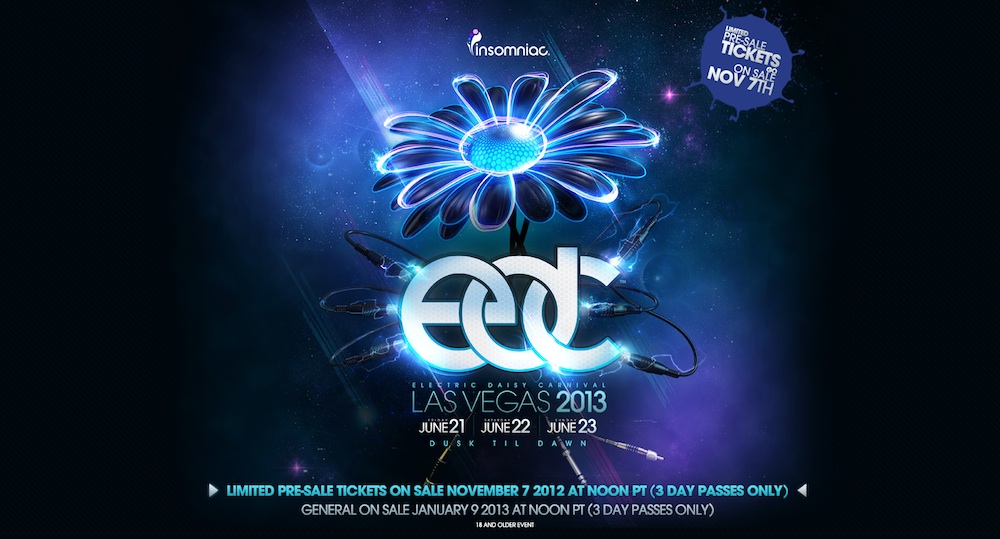 Las Vegas, November 1, 2012 – Insomniac announces the highly anticipated return of Electric Daisy
Carnival (EDC) to the Las Vegas Motor Speedway for its 17th annual celebration on June 21, 22 and 23,
2013. EDC Week also returns to Las Vegas for an entire week of nightclub and dayclub events, a music
conference, and other special surprises spanning the week from June 18 – June 25, 2013.
With more than 320,000 fans gathering under the desert sky this past summer, Electric Daisy Carnival
claimed the title of North America’s largest music festival of any genre. EDC sold out weeks in advance of
the 16
th
annual event, with attendance reaching 115,000 fans in a single night.
“Electric Daisy Carnival 2012 was really special to us,” said Pasquale Rotella, founder and CEO of
Insomniac. “In addition to it being the largest gathering of music fans in North America this summer, the
energy, love and sense of community surpassed anything we have ever experienced. It was humbling
and inspirational.”
Insomniac transformed the 1,000-acre complex into a fully immersive audiovisual adventure with more
than 150 musical acts, 500 theatrical performers and 12 large-scale interactive and flame-wielding art
installations, along with state-of-the-art lighting and sound production and nightly pyrotechnics displays.
This was its first year as a Signature Las Vegas Event.
“Safety and the fan experience have always been and will always be our top priority,” said Rotella. “We
listen to our fans and accept their guidance. Our team is already working diligently with Las Vegas, the
local authorities, and the Speedway to improve traffic flow to make EDC 2013 the best experience yet.
And, of course, we’re also brewing new imaginative ideas for next year!”
Fan and artist shuttles as well as taxis to and from the Las Vegas Motor Speedway will have a newly
dedicated route in 2013 to minimize the impact on individual traffic. The parking staff has been increased
in order to move and park cars more quickly in and out of the lots, and there will be additional lanes in
and out of the event. Additional adjustments to enhance the guest experience and relieve transportation
congestion outside of the event are already being planned and tested for implementation during the 2013
festival.
Insomniac will hold a special limited pre-sale on November 7 at 12 p.m. Pacific Time, with three-day
General Admission tickets available at $199, then $259, and three-day VIP tickets available at $450, untilallotments run out. Tickets for EDC Vegas 2013 officially go on sale on January 9, 2013 at 12 p.m. Pacific
Time, with pricing to be announced in the coming weeks. A layaway pricing option will again be available
during both on-sales, except at the lowest priced ticket tier. Single day tickets will not be available for this
three-day experience.
Exclusive hotel deals are available now and travel packages will be available once tickets go on sale at
www.electricdaisycarnival.com and www.insomniac.com. Hotel deals and shuttle passes will continue to
be available after the early bird tickets sell out. Travel packages are only available while tickets are on
sale and include hotel, three day shuttle pass and a ticket to EDC.
Details regarding the full EDC Week schedule of events, as well as the return of the highly acclaimed
EDMbiz Conference, will be announced in the upcoming months.
Tweet It: Just announced by @insomniacevents: 2013 @EDC_LasVegas dates and on-sale info
revealed at www.electricdaisycarnival.com!
About Insomniac
Insomniac produces innovative music festivals and events featuring immersive multisensory
environments enhanced by state-of-the-art lighting and sound design, large-scale art installations,
interactive circus and theatrical performances, boundary-pushing special effects and pyrotechnics, and
fan participation. The quality of our fans’ experience is the company’s top priority. Insomniac’s premier
annual event, Electric Daisy Carnival, is one of the largest, most spectacular music festivals in the North
America. Insomniac has produced more than 250 music events and for more than 3 million attendees in
California, Nevada, Colorado, Washington, Texas, Florida, New York, and Puerto Rico. Founded by
Pasquale Rotella, Insomniac has been based in Los Angeles since it started in 1993.
Keep up with Insomniac announcements and news on Facebook and Twitter.
About Las Vegas Motor Speedway
Las Vegas Motor Speedway is a wholly-owned subsidiary of Speedway Motorsports, a leading marketer
and promoter of motorsports entertainment in the United States. For more information, visit
www.speedwaymotorsports.com.
Contact:
Alison Monaghan
Kirvin Doak Communications
amonaghan@kirvindoak.com
(702) 737-3100 x107
Erika Raney
Insomniac Director of Communications & CSR Initiatives
erika@insomniac.com