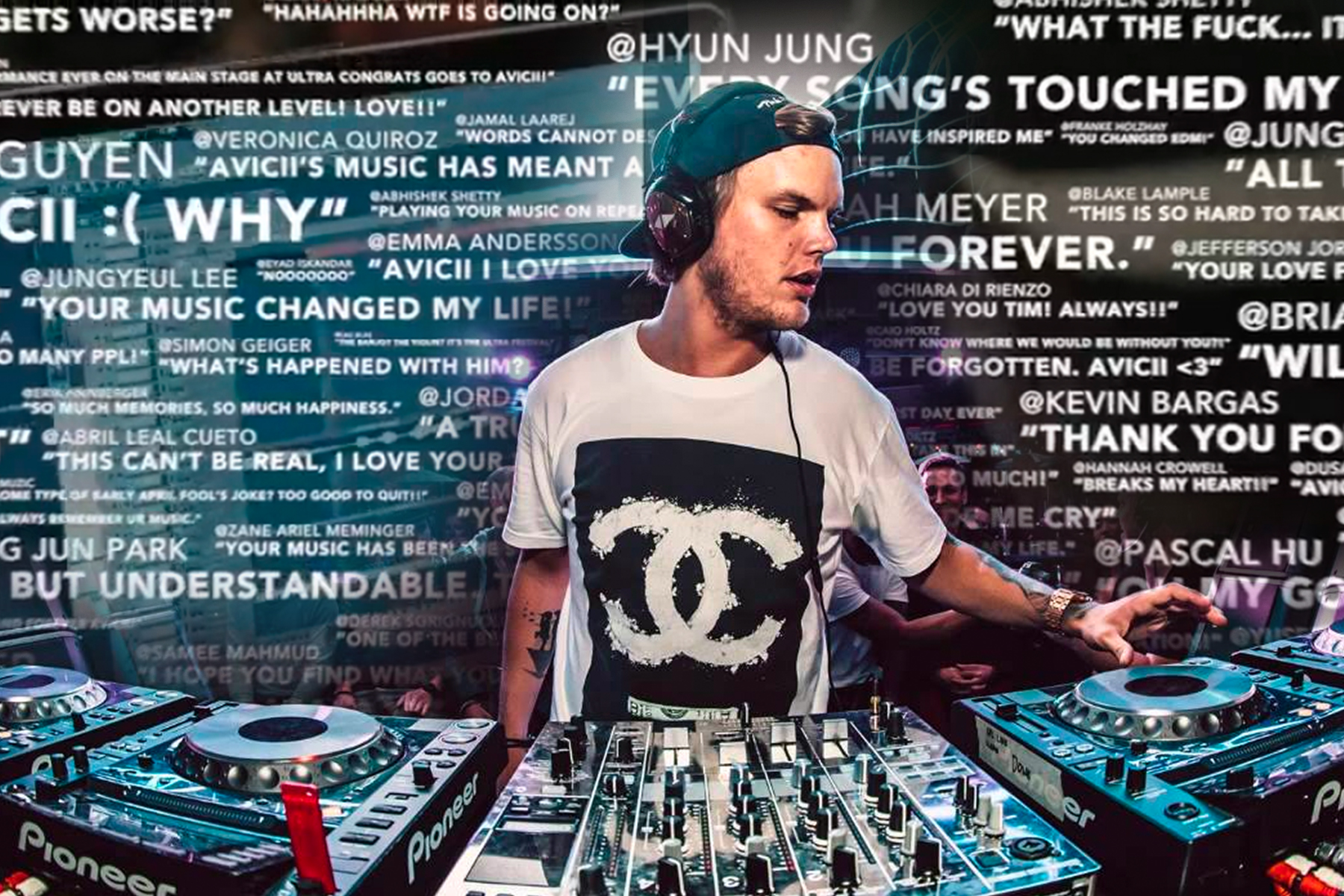 
As the news of Avicii‘s untimely death continues to reverberate through the dance music world, countless industrial professionals have come forth to celebrate the life of Tim Bergling. On the radio, several noteworthy producers spoke to SiriusXM BPM on their encounters with the EDM icon, both on stage and in the studio. Online, many came forth to pay their respects over Twitter. Even at Coachella weekend two, artists paid public tribute to Bergling by playing his most popular hits in their sets.

Following the short statement released by Bergling’s family, Avicii’s manager and veteran A&R executive, Neil Jacobson, spoke with the press about the 18-year-old wunderkind turned global superstar. Jacobson began working in the studio with Avicii on “Levels,” the international hit that catapulted the Swedish DJ’s career to the moon, and on every album thereafter, each of which launched the producer to new heights. In an interview with Variety, Jacobson revealed that Avicii had just completed a new album. As the acting president of Geffen Records, he had spoken with Bergling some 48 hours before the producer was found in a hotel room in Oman.

Discussions over what to do with Avicii’s unreleased songs are ongoing, and Jacobson was weary on sharing details of guest collaborations or the album’s underlying themes, at least until he speaks with Bergling’s family. But the Geffen Records president was keen to share insights on the producer’s uncanny work ethic, his knack for trending sounds into completely new directions, and his artistic stamp on dance music culture.

Variety: What was it that drew fans to Avicii?
Part of it was how big “Levels” was and how original and fresh the sound was, and part of it was his persona. But all of that together just exploded. … The real thing with Tim was his uncanny sense of melody — the kind that sticks in your head. It’s not the chords. It’s not the synth tabs. It’s the melody of “Levels” and “Wake Me Up.” It’s funny because in the dance world, so often you have the DJ providing the track and the beat, which he did. But, people don’t know that the secret sauce with Tim was his melody. The understanding of it, how to identify it. He always picked out the right one. He always knew how to direct the singer. He was very involved in the phrasing — how the singer entered and exited each vocal. Nobody did what Tim did and I think that that’s why he kept having hits.

What was the status of his next album?
We were working on it and it was his best music in years, honestly. And I know because I [A&R’d] all of his albums. He was so inspired. He was so psyched. We had done a month of grinder sessions. We had to actually put end times on the sessions because Tim would just work for 16 hours straight, which was his nature. You had to pull him out. Like, “Tim, come on. Go to bed. Get some rest.” … It’s just a tragedy. We have this incredible, magical music.

Was he a perfectionist? A workaholic? An overachiever? How would you describe his drive?
All of it. All accurate. And all related. Overachieving, workaholicism, perfectionist. Correct. Correct. Correct. Until he would swing to the other side. Why was he in Oman? I was like, “Tim, where is Oman? I don’t even know.” He was, like, “I’m going to Oman. It’s going to be cool.” That would be Tim. He would slam so hard and then he would pull out like a fighter pilot.

When we were putting out the last EP — because we had talked a lot about the future [of music] and that it wasn’t really about albums anymore, but it wasn’t about singles, so we were going to put out collections in blocks — right before the thing is getting ready to be delivered and I’ve got final mix and final master for him to [sign off on], I’m hammering Tim every day. As the A&R guy I’ve got to get the record done. All of a sudden, he jumps on a plane and flies to Machu Picchu. We didn’t hear from him for three days.

So what’s going to happen to the record?
I have no idea. I’m going to sit down and talk to the family once everybody has a chance to take a breath. I’ve never actually had this happen with an artist I’ve worked with before and this closely. So, I don’t know. We’ll try to get some advice from the family and everybody’s going to put their heads together and try and do what we think Tim would want us to do.

Are there any features on the album?
There’s a few. I’d rather not say who. Tim had a list of people he was hoping we could reach out to for this album. That was actually the last communication I had from him two days ago, and that’s haunting.

His live shows drew massive crowds yet he decided in 2015 to effectively retire. Was he turning down offers constantly?
Every once in a while we would touch on the subject. Like, “Hey, what if you did this show?” He’d say, “No, no, no. I’m not doing shows, but if I did do something I’d probably play an underground club somewhere unannounced just for the fun of it.” He missed that element of it. He missed the actual DJing. He loved pure dance music.

What kind of money did he leave on the table?
Those offers didn’t come directly to me, but my perspective was as follows: What would happen when Tim finally came back and did a show? I believe it would’ve been a seven-figure show just to start.