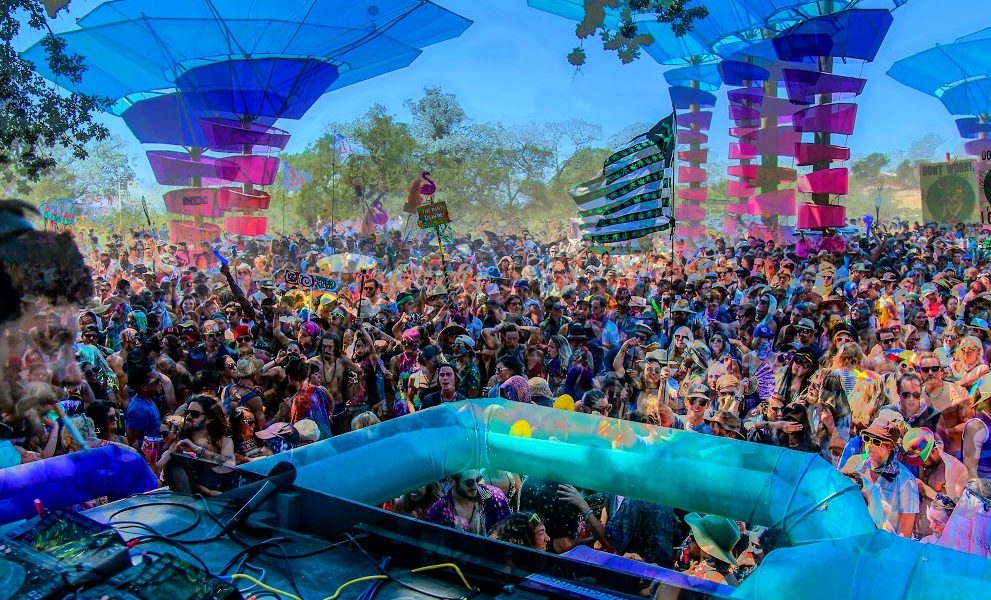 Lightning In A Bottle 2016: The Perfect Weekend [Event Review] The intense energy that fills the air when entering the San Antonio Recreation Area in Bradley, California is truly a remarkable one. Joyous vibrations are shared between all of the attendees who anxiously await to enter the festival gates on Thursday morning to start the adventurous weekend that greets them on the other side.

After setting up our ez-ups and tents, my friends and I cheered to the start of Day 0 with some fresh mimosas. Exchanging smiles and laughter while feeling overall excitement to be back at our favorite festival, we could all sense that it was going to be another LIB for the books…and boy were we right. The best thing about festivals that have a Day 0 is that you get to settle in, get comfortable, and become familiar with the entire festival layout instead of scrambling to find your way around the grounds while simultaneously hoping to make it to the first artist you want to see for the day. My friends and I saw Day 0 as the perfect opportunity to wander around and explore our home for the next four days. However, just because it’s Day 0 doesn’t mean that your daily dose of fun is compromised. The Do Lab knows how to treat their attendees right, and kick off live music that very morning until the the wee hours of the night for those who want to get the party started the moment they step through the gates.

As Friday morning greeted us bright and early, my crew and I decided to make the most out of the day. The first set we saw was dot who played at the Pagoda Bar. Pumping out the perfectly balanced set of chill and groovy for the hot day, dot kicked off my LIB experience beautifully. A swagged out lil blonde beauty, dot was a master at creating a dope ambience. Effortlessly mixing from more relaxed and slow tracks to heavier trap-esque songs, I absolutely fell in love with dot on Day 1. Friday evening, I rushed over to the main stage aka the Lightning Stage to see the ultimate oddball goddess otherwise known as Grimes. I literally screamed when she kicked off her set with one of my favorite tracks, “Realti.” The entire set was just one big dance party, her dancers and back up singer adding an elevated level of fun to the performance. The most stand out thing about Grimes’ performance was how even though there were some minor technical difficulties during her show, she didn’t let this affect her. Instead, she just shrugged it off and kept on going. A set filled with a blend of a few of her classic tracks such as “Genesis,” as well tons of new songs off her new album “Art Angels,” Grimes was hands down my favorite set of the entire weekend.

When the sun set for Day 2, TOKiMONSTA came out to play. No stranger to LIB, it was definitely a treat to see TOKi absolutely kill it at the Thunder Stage again, the same spot she played two years prior. TOKI’s entire set was exhilarating as she threw in tracks such as Tiga’s “Bugatti” and Keith Ape’s “It G Ma.” You could see TOKi feeding off of the energetic crowd, and with a performance that epic, TSS is officially giving TOKiMONSTA the title “Queen of the LIB Thunder Stage.” As the final day of LIB came around, my friends and I knew that we had to boogie our little hearts out as hard as we could before we left the beautiful land. Early afternoon we found ourselves at Lafa Taylor‘s set at the Lightning. He started off with a beatboxing mic check, which was insanely impressive in itself, before diving right into his smooth, electro hip-hop set. He dropped quite a few new tracks off his upcoming collab album “Feel,” and his sensuous vibes got us ready for the evening’s magic. As the evening rolled around, we headed straight to Mr. Carmack‘s set. I couldn’t help but feel excited when Carmack began to drop some hyphy tracks, his hype men’s shout outs to the Bay Area reminding me of home. Seeing literally every single person packed inside the Thunder Stage getting down and dirty during his set was definitely one of the most insane moments of LIB.

Finally, we finished off our weekend at Lightning in a Bottle with Chet Faker. A complete 180 from Carmack’s set, it was a nice way to wind things down. Sensual yet groovy, Chet Faker blew me away with his voice. It’s extremely rare to find an artist who sounds exactly like their records, but it’s like you’ve stumbled upon a unicorn when an artist almost sounds better live than the actual record. Chet Faker is that unicorn. Starting off the set a bit slower with an entire live band, Chet Faker eventually had the band leave to have a one on one with the crowd while singing the track that started it all for him, his cover of “No Diggity.” The entire crowd sang along and vibed along, making for one magical performance. With a little bit of everything for everyone and anyone, Lightning in a Bottle breaks boundaries from just your average festival. Aside from the wonderful music lineup that LIB showcases, the festival is also filled with an array of other activities for attendees to dive into. From yoga classes being taught all day by some of the globe’s top tier instructors at the at the Yoga Om, to the Jive Joint that’s overseen by head honcho Super Tall Paul to give the folks of LIB a hilarious performance of comedy that ran deep into the night, and even the mindful eating cooking classes taught at the Learning Kitchen, there was never a dull moment at LIB. Once the music on the three main stages were turned off, there was still always something for the night owls to do. Only at Lightning in a Bottle could you ride a ferris wheel at 3 AM! My personal favorite activity outside of the music was watching the breathtaking view of the entire festival at Meditation Lookout. With a view that spanned from the Woogie stage, all the way to the Thunder, it was a remarkable sight to perch up on the hill with hundreds of attendees, all soaking in the sunset together as one.

The perfect place for people to come together let their inner freak out for four days straight, LIB is the ultimate playground. The Do Lab, you’re definitely doing something right, and I am eternally grateful for the amazing production that you put on for the people to come together and enjoy. Thank you for another spectacular weekend.

Special thanks to Helen Perez / GOTOPHOTOGRAPHY for capturing all of the magic!

Still fiendin’ for more of The Do Lab? Make sure to stay connected via links down below and keep an eye out for Woogie Weekend which will be taking place this July 8-10 for its sophomore year at Oak Canyon Park in Silverado, SoCal!