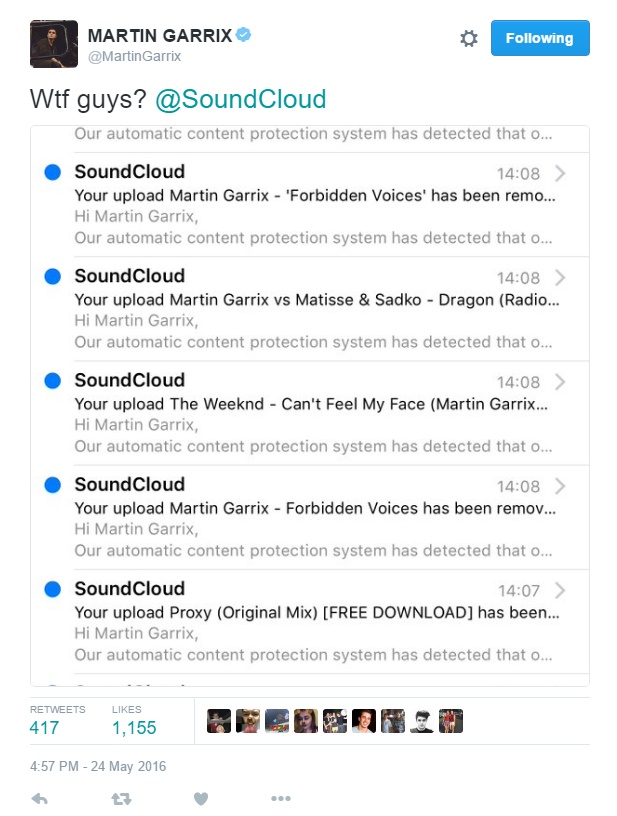 UPDATE 8pm PST | The tweet has since been removed, and 5 out of the 7 tracks have been restored to Martin’s account.

Like a tornado in the midwest, or an earthquake along the California fault lines, it seems that Soundcloud takedowns can come from anywhere, at any time… even for Martin Garrix.

Martin just posted this screenshot on his Twitter of a series of emails received when Soundcloud went on an absolute bender and removed at least 7 of his tracks. Looking on his Soundcloud, though he still has 22 remaining, you can tell that many are indeed gone.

Of course, this is what happens when you have an automated system. Included in the takedowns were his tracks “Forbidden Voices” and remix of “Can’t Feel My Face,” ostensibly two of his most successful tracks. We have no doubt that Martin, his team, and Soundcloud will resolve this in a timely manner. However, even just the fact that it happened in the first place should be embarrassing. This article was first published on Your EDM.
Source: Martin Garrix Blasted By Soundcloud Takedowns