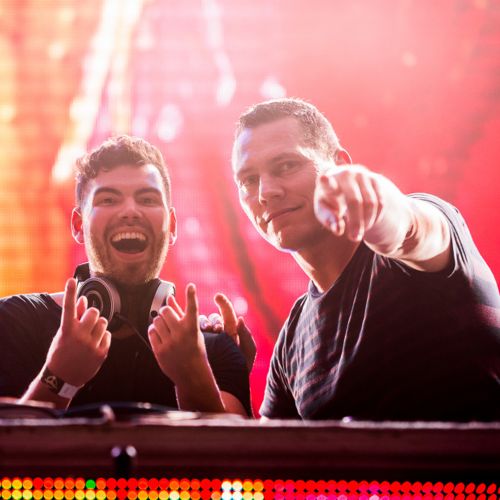 
Tiësto and MOTi have teamed up to produce a wildly energetic big room original titled, “Break The House Down.” The track features heavenly choral vocals, an intriguing, harmonic melody, and unrelenting beats in each drop. Showcasing seamless production quality, MOTi and Tiesto engineered an anthem that will surely be played out across the world this festival season.

The two renowned DJ and producers are known for their eclectic takes on the house genre, and together the Dutch artists make up a lethal team. As two of the world’s most acclaimed leaders in house music, MOTi and Tiësto’s fierce collaboration, “Break The House Down,” will undoubtedly be a surefire hit.

MOTi sheds some light about working with Tiësto, since some of their last collaborations including their remix of Major Lazer & DJ Snake‘s “Lean On,” and their hit single, “Blow Your Mind.” “It was great to be working with Tiësto again after 2 years. We have done a lot of projects together in the past so it felt natural and it was a lot of fun again.” MOTi also shares that the to listen to this track, “you definitely have to be in party mood. It’s pretty heavy record even in my sets I save it for the last 15 minutes of my set. It’s a big room banger!”

He also selected the following tunes for Dancing Astronaut to depict where his sound is at currently:

Yellow Claw – Beastmode ft. Stoltenhoff
“Love this record, should listen from breakdown to drop, don’t skip ahead. Love the element of surprise in this one.”

Steve Aoki & Quintino – Mayhem
“This record is just built to break the house down!”

MOTi – Earthquake
“One of my more uptempo heavy drop records i gave away for free on my MOTi Massive Free Download Series!”

About the Author: Kassi Chrys

A recent graduate of NYU, Kassi Chrys has been immersed in the music industry for over four years as a journalist. In addition to writing for Dancing Astronaut, Kassi is currently studying for the LSAT as she intends to pursue a career in music law. Although her taste is eclectic, Kassi’s favorite genres include G-house, future bass, and big room. With a life-long history exploring classical to contemporary styles, Kassi makes it her mission to find and feature innovative artists from all over the world.