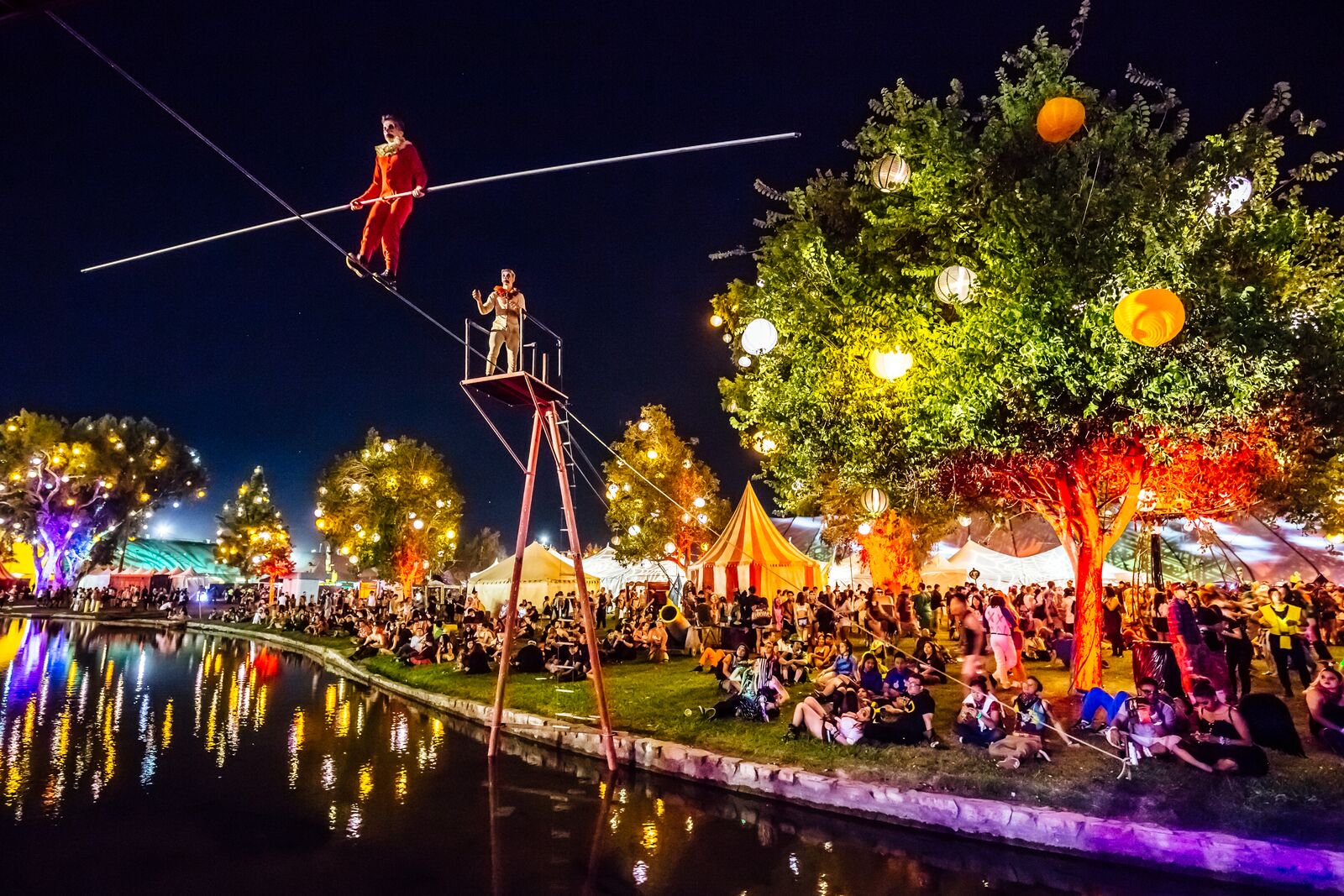 Outliers & Oddities is an exclusive Dancing Astronaut feature in honor of Halloween.

With an inconceivable number of Halloween party playlists floating around, we’ve created the anti-party playlist — a hearty harvest of eerily evocative jaunts by the likes of RL Grime, Gesaffelstein, deadmau5, and more. Detailed are 10 EP and full length suggestions, along with the creepiest track from each, for the devilishly daring, willingly introspective, and downright spooky.

Seldom emerging from seclusion, the aloof Burial has been something of an anomaly in the dance music community throughout the years. The real name of the UK garage pioneer, after all, long remained a mystery in itself. To the surprise of few, Burial has only once spoken on the title of his second album, the seminal, unabashedly emotive Untrue. Ten years ago, upon its release in 2007, he said, “It’s like when someone’s not acting like themselves.” Continuing, “They’re off-key, something’s wrong, an atmosphere has entered the room.”

Burial cemented his vision and emotionally dialed-in ethos through this transient state of eeriness. Untrue is lonely, cold-blooded, and simultaneously distant. At times, the vocal embers of Burial are left ablaze, festering listeners in elements of induced introspective and concluding in the dark emptiness of a sonic void. It’s clear Untrue is a deeply personal record from Burial, but it’s also an off-key atmosphere that’s easy for listeners to get lost in, too.

One can’t create a Halloween-themed record list without RL Grime‘s seminal LP debut, VOID. The twelve-piece collection showcases the American bass pioneer’s skills in creating booming trap bombs that manage to be artful at the same time. As such, the album in its near-entirety has been tirelessly rinsed on festival and club stages worldwide, and continues to be a favorite among fans three years after its release.

While RL Grime plays around with his “softer” side in cuts like his How To Dress Well-assisted “Reminder,” his “Let Go” interlude, or his titillating breaks-esque Boys Noize collaboration “Danger,” he still manages to maintain a cunning air with each production. This sentiment is further amplified in the LP’s heavy cuts, which include a raunchy “Kingpin” alongside Big Sean and “Scylla,” among others — powerful drops and heavy bass can level stadium-sized crowds, while tense synths work in higher frequencies to raise goosebumps with their progressions. One would be hard pressed to find actual peace or quiet in the deceptively-titled VOID.

Gesaffelstein’s Aleph is a quintessential Halloween record — it’s one of the best modern takes on harrowing club music, if not the epitome of spooky dance albums.

Thoughtful curation drives the French producer’s 2013 LP debut. Its rampant juxtaposition of sonic amplifications, flowing between high octane numbers like the artist’s well known “Pursuit,” or “Hate Or Glory,” and at times, merely blowing off steam. The curatorial choices on Aleph help to amplify the overall magnitude of the record, but it’s a daunting classic within the established decorum of Gesaffelstein nonetheless.

The cataclysmal jaunt that is Boys Noize‘s Mayday opens the floodgates that envelope Alex Ridha’s sinister techno repertoire, releasing enticing elements of acid house and industrial techno en voyage. One may argue the record’s lead track “Overthrow” is his most feverish release to date; yet, in an effort that equates with the Boys Noize ethos, he leaves listeners with an “abandon all hope” frame of mind with the LP’s title track. “You have nothing left but destruction,” it asserts.

Frankly, the haunting statement appears all the more true as the record carries on, and yet, Mayday somehow lends itself to a more upbeat, optimistic denouement. Partially inducing this changeover is the inclusion of the synthpop outfit Poliça on the serene “Starchild.” Certainly, Mayday’s sonic spectrum exemplifies an authentic techno outpouring.

Eric Estornel’s son Solar inspired the creation of his eponymous sophomore album under his Maceo Plex moniker. Ahead of Solar, however, which explores a variety of eclectic soundscapes, the Barcelona-based talent offered up a more club-friendly Journey To Solar EP.

Journey To Solar is packed to the brim with destructive dance floor weapons — seven in total — that when listened to, conjure an apocalyptic feeling. It immediately creates a sinister atmosphere with its opener, “The Replicant V1,” and builds from there, employing generous helpings of acid synth, cunning progressions, and tough percussion that more or less zombifies those whose ears come in contact with it. Journey To Solar represents exactly the dark, grooving Maceo Plex sound that fans have come to know and love from him as of late.

REZZ burst into the scene with brute force, creating a niche of her own within the more French-inclined electrosphere with unique and eternally haunting creations. The Canadian icon’s years of fine-tuning her sound and building her résumé as one of mau5trap‘s youngest protégées culminated in the release of her inaugural studio project, Mass Manipulation.

Fans expected REZZ to wield her expertise in all things sinister for her first album, and she accomplished such a task in spades while also demonstrating her depth as a producer. Raunchy synths and pungent kicks hit at perfect moments to create ultimate tensity, aided further by off-putting chords and sonic distortions that paint cloudy mental imagery. Even seemingly innocuous-sounding compositions like “Green Gusher” and “Relax” can take a turn for the chaotic, ultimately keeping listeners hooked on her offerings until the LP reaches its final note in “Ascension.”

Mass Manipulation is indeed an ideal listen for when it feels time to venture into a more sinister auditory realm.

deadmau5 – For Lack of a Better Name

Speaking of mau5trap, it’s absolutely essential to include label don deadmau5‘ For Lack of A Better Name — his forth album, released in 2009.

For those that might not be familiar with his older discography, this is of course the LP that includes his ubiquitous Halloween classic “Ghosts N’ Stuff,” which some would say truly cemented his status as a superstar DJ. “Ghosts N’ Stuff” and its sequel aren’t the only titillating creations of the bunch either. For Lack of A Better Name’s opener “FML” wastes no time in assaulting the ears with grueling kicks and sharp laser bursts, while “The 16th Hour” is a ten-minute long bout of hypnosis that traps the listener in its repetitive, yet impactful grasp.

Perhaps the most iconic of all, however, is “Strobe” — one of deadmau5′ most beloved creations to date.

He shows off his full spectrum in this serious work, which is an introspective journey meant for a space outside the club. A cloudy aura permeates each piece, however, whether the soundscape be ambient or experimental. For example, the LP’s title track “Anxious” is as hair-raising as its title implies, utilizing intense sonic layers to douse the mind in darkness. “A Brief Respite” offers a spot of ethereal light among other pieces like “Escape,” “Unleash,” and a dance floor destroyer, “Target Line.” Anxious gave Rødhåd free reign to express himself as an artist, and he most certainly did not disappoint.

Rob Swire didn’t need to use his prior fame from Pendulum to break through to the upper echelons of EDM with his newer project Knife Party — the outfit became instant chart-toppers upon the release of their breakout single, “Internet Friends.” This single was one of four from their groundbreaking 100% No Modern Talking EP, which caught global attention for its heavy electro sounds and out-of-the-box approach to more commercial tropes at the time.

Each piece is cunning in its own right; “Tourniquet,” for example, blasts the ears with dynamic, screeching synth work and bold hits of melody, while “Destroy Them With Lasers” feels like a wild escape attempt from an evil alien spaceship while listening. “Fire Hive” closes out 100% No Modern Talking with an hommage to Swire’s bassier roots, spitting out raunchy, dubstep-esque rhythms that are complimented by the robotic sounds that serve as the EP’s primary motif.

The Digital Blonde – The Witches

Last, but not least, we close out the list with an utter trance gem invoked by The Digital Blonde.

The Witches is a befitting title for the album, which travels across wicked Goa landscapes, into the depths of progressive trance, and through waves of ambient to create a cohesive and fulfilling mélange of tracks. Its sixteen-minute opener “Screaming Banshee” immediately sets the tone of the LP with a grungy progressive underlay and complex build, while other productions like “Aliens Attack” and “Wishmaster” blast the ears with running bass lines and haunting medieval vocals. While the album as a whole covers the full spectrum of emotion in its confines, it certainly isn’t lacking in pieces fit for Halloween celebrations.