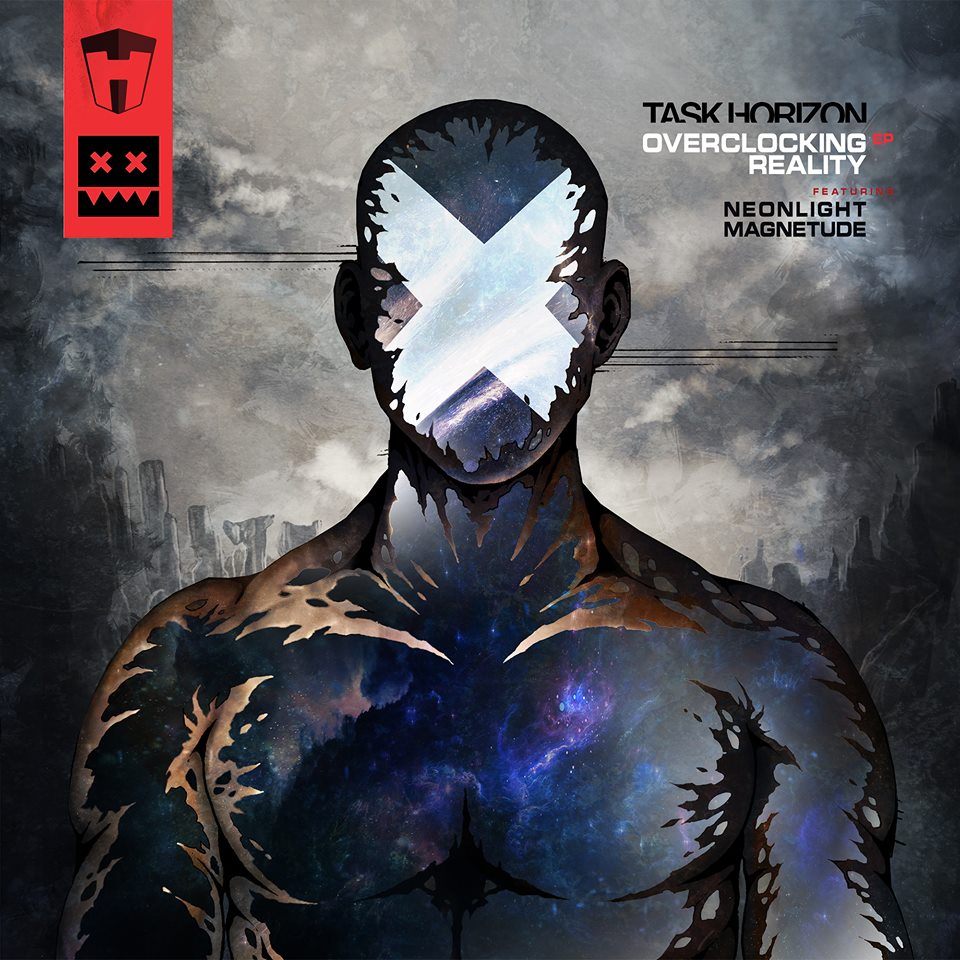 Task Horizon took a bit of a hiatus since their last big releases on Blackout and Overtech Music in 2016. They just released a single in December on Evolution Chamber, “Forbidden Planet/Rogue Transmission” as sort of a steppy preamble to their upcoming EP on Eatbrain. Overclocking Reality releases on Beatport this coming Monday, February 5 and sees a massive return to form for the Swiss neuro/rave team.

Four of the five tracks on Overclocking Reality have already been made available to stream on Soundcloud, so fans already have a pretty good idea of the madness that will ensue with this long-overdue EP. They’ve teamed up again with Magnetude on the brain-scrambling neuro track “Immortality Protocol” and with Neonlight on “Enigma Machine,” a track which manages to be melodic while also sounding like robot warfare. The title track is also quite melodic, taking some influence from 80s synth-style electro, hence the rave vibe. “M-920 Cain” has a fun sci-fi feel while managing to pack in as much grindy sub bass as is possible in a 175BPM format. Album closer “Flight Simulator” goes back to the rave vibes with some old school synths over, you guessed it, more mad sound design and sub bass.

Since many of the tracks are available to listen on Eatbrain’s Soundcloud already and since many fans have been clamoring for more Task Horizon but not much is known about this four-man production powerhouse, we thought it might be fun to ask the group for a list of their biggest influences and why these influences inspire them. Task Horizon are known for their big, bold, theatrical neuro and techstep, but how do they get to those sounds? These five artist provide a good window into the minds of the producers and may help inspire more incredible production. It’s a great list supplied by TH producers Aaron von Schroder and Tim Kleinert, so strap in:

Around the millennium these two lads redefined DnB in the most futuristic way possible. “Wormhole” is probably the best DnB/Neurofunk LP ever released. I tried for years to recreate tracks like like “Watermelon” and “Sick Note.” The combination of EMU sampler and Mackie desk was the drum and bass sound of the pre-DAW era. –Aaron/TH

Oh boy, what a duo! Similar to Ed Rush and Optical in the sense of making futuristic DnB, but with a much darker and more techno-y approach. No one has even come close to their style. Timeless club music is rare, and they really pulled it off. Would love to hear what they would come up with if the duo reformed. –Aaron/TH

Another duo that needs mentioning. Especially the„Clockwork“LPthey did in 2001. They definitely were another big influence on how neurofunk sounds today. It’s always nice to go back to those tunes in order to find inspiration. –Aaron /TH

This one will seem ridiculous for our audience. But as an antidote to the potentially pathological obsession with the mere fabric of sound within most fields of electronic music, I find it humbling and rejuvenating to regularly re-experience music which derives its meaning wholly through its structural architecture. A fugue by Bach means something, regardless if performed by a string ensemble, multiple synthesizers or a bunch of kids blowing on kazoos. –Tim/TH

Here’s another curve ball. His album “Kind of Blue” was the first jazz album I ever heard, and it obviously influenced me as a jazz musician. But far more importantly, his ever-present willingness to constantly re-invent himself and embrace every new technological change in music, not only to stay relevant but in the course even to push it further as he proceeded –all this is a huge inspiration for me on a meta-level. Seriously –I wouldn’t be doing this without him. –Tim/TH

Task Horizon’s Overclocking Reality featuring Magnetude and Neonlight will release on a Beatport exclusive February 5 and worldwide on February 19. Check the Eatbrain website for other purchase links as they become available, as well as the EB podcast which will likely come soon after the EP’s release.