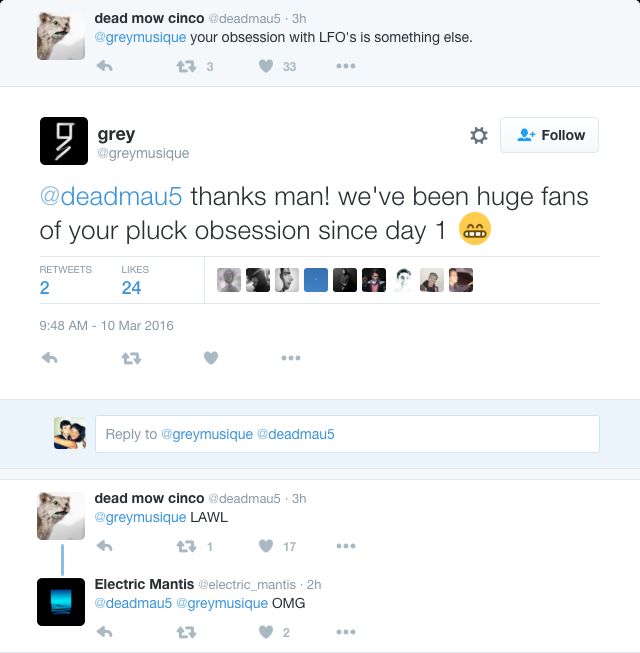 Mysterious, LA-based duo Grey have returned once again under the watchful eye of Zedd to release a stunning and highly complex remix of his album’s title track, “True Colors.” Recently acclaimed for their work garnering the attention of both Zedd and Skrillex, the pair of brothers have risen quickly in the dance music community’s eye, landing themselves noteworthy spots on Zedd’s Soundcloud page as well as releasing official remixes for both Kaskade and Jack Ü. Now, their most recent flip has landed, giving the rest of their catalogue a run for its money.

Taking the backbone of the original track, the duo entirely reimagines its core feeling and potential. Natural instruments are swapped in and out fluidly with harsh, electro elements, while the vocals anchor the listener down. The production quality and attention to minute detail throughout the entire work is something to be commended, and we aren’t the only ones to do so.

In a tweet sent out earlier this morning, even Deadmau5 gave the boys a shoutout. Beginning with a gentle, melancholy piano interlude, the vocals from the original track make their way into the space with an eery and foreshadowing intensity. Tight, electronic percussion is eventually introduced, revealing the song’s underlying tempo and source of energy. The main, tonal synths are replaced by an aggressively strummed acoustic guitar, before the track swells upwards into the drop. Suddenly, the speed is doubled and the track transforms into a fiery, chaotic mash up of fast kicks, relentless lasers and stuttering percussion. The break ends as abruptly as it began, cascading downwards into a peaceful environment full of light guitar plucks and sounds of storm clouds overhead. We’re left with only them and the vocals as the song fades to close.

Listen to Grey’s remix of “True Colors” below, and keep you eyes peeled for more groundbreaking work to come.

This article was first published on Your EDM.
Source: Producers Grey Take On Zedd With Incredible, New Remix [Stream Here]