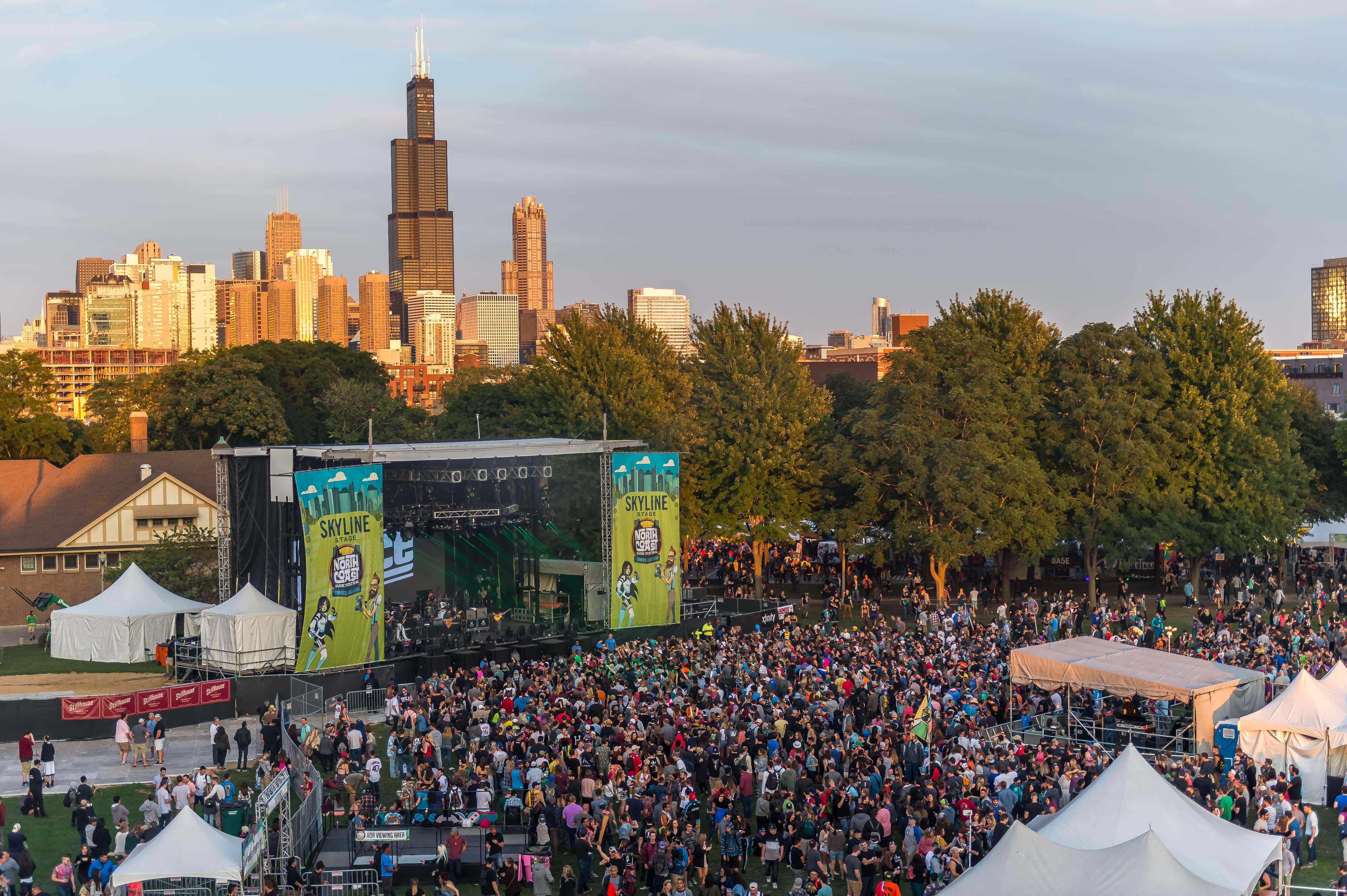 
Every year, some of Chicago’s most all-embracing EDM, funk, rap/hip-hop, and indie event promoters—React, Silver Wrapper, Metronome, and Cold Grums—unite to piece together “summer’s last stand,” North Coast Music Festival. Since 2010, the festival has returned to Union Park each Labor Day Weekend to house not only world-class acts from nearly every crevice of the musical continuum (deadmau5, Widespread Panic, Portugal The Man, Gucci Mane, Pretty Lights—just to name a few), but also a myriad of visual art installations, ranging from a live, psychedelic graffiti demonstration from Chris Dyer to a unique pop up gallery showcasing solely local Chicagoans.

Tucked between some of Chicago’s most vibrant and energetic neighborhoods, including Wicker Park, West Town, West Loop, and Pilsen, North Coast’s Union Park atmosphere is a happy paradox: a serene, intimate park setting, encapsulated by trees, penetrated by the awe-inspiring urban skyline seen overhead and some of the most in-demand performances of the summer. This year, North Coast touts an larger experiential focus, including its first-time poolside pre-party each day, which itself will host a number of installations, as well as a stark increase of visual performers, like the Bam Creates crew.

Co-founder of North Coast, Silver Wrapper talent buyer, and longtime Manic Focus manager, Michael Berg, sat down with Dancing Astronaut to discuss how the festival has grown throughout its nine years of successfully capping off the brimming Chicago summer events season. He explains how the festival has garnered its serial-attendees by catering to the “original coasties,” who tend to prefer jam and indie acts—like this year’s securing of The Revivalists and funk legend, Jamiroquai, in his first midwest performance in over a decade—while not making the mistake of neglecting the younger crowd, booking budding Chicago rapper Juice Wrld and fan-favorite dance acts like DJ Snake, RL Grime, and Axwell ^ Ingrosso.

What was your initial vision for the festival? Did it turn out the way you conceived it nine years ago?

It did at first. What I’ve noticed is as the market and the festival landscape changes, our goals are shifting with them. As our fanbase ages, things change. We’re still very proud of it. It’s definitely under a metamorphosis right now.

Can you expand on that?

I think that if you went to the festival in the first year, and you were 21-years-old, now you’re 30. That’s a big difference in life as far as maturity and priorities. We’ve always tried to curate the show with a little bit of a younger audience in mind. When we’ve leaned toward the older demographic’s music in the past, it hasn’t translated as well.

But we really saw a different response this year with some of the stuff that we booked. It made us realize that our fans are growing up. You just have to be conscious of who you’re servicing, which goes all the way up and down the ladder from the artists and their agents, to the lifeline of the festival, the fans, who buy the tickets and represent the brand.

We want to be loyal to the original coasties; but we also want to find the balance between doing that and keeping forward-thinking, like booking acts that are maybe for our undercard this year, but are maybe going to be headliners in a year or two. A lot of times the people we book [for North Coast] a year later, will be on the main stage at Lollapalooza.

Aside from lineup curation, what other areas would you say the event has evolved in over the years?

Definitely the experiential part has changed dramatically. We’ve got a much bigger presence of visual performers and art installations. Something we’re introducing this year that we’ve never done before is a daily pool party. There will be a full curation of art inside the pool. It’s just going to be for a few hundred people per day, including the artists and their guests. But a few hundred people per day will have the opportunity to buy tickets to come to this four or five hour pool party. Bam Creates is going to take over the art and do a lot with that.

The one limitation we have with it is that the festival ends at 10 pm every night. There’s only so many hours of darkness, so the types of installations that we have at something like Suwannee Hulaween, our other festival down in Florida, where things glow at night or things with fire, we can’t really do as much of that at North Coast because the majority of the fest is daylight. So you have to do installations and activations that work in the day time.

What about the venue and the location has kept you there since the first year in 2010?

First of all, we have a great relationship with the city and the park district. It’s really just the perfect location and the perfect size for this type of show. The majority of people who are coming to this show, probably 85 percent, are coming from the greater Chicago area. If you’re looking at Chicago proper, it’s right in the middle of West Town, the West Loop, Wicker Park, Bucktown, Lincoln Park, Pilsen—all those neighborhoods that are hot spots. It’s very centrally located: easy to find parking, it’s right off a train line. If you’re coming from Northbrook, or you’re coming from the West suburbs or the South Suburbs, it’s right off the highway.

The neighborhood has been generally welcoming of us. So, it’s kind of one of those things like if it’s not broken don’t fix it. If we were to sell out in advance five years in a row, maybe we would consider moving up to a bigger location, but it seems to sell out by the weekend of the fest every year. It feels like we have the right size park for the right size crowd that we’re generating.

Another thing that I really like about it is it is a park and a lot of the festivals in the city feel very urban. North Coast is definitely an urban festival, but there’s still trees and it still feels like a park when you’re there. I love how when you’re watching the main stage, you can see the Willis/Sears Tower poking up beyond the trees. So it’s just this little visual reminder that you’re in the city of Chicago.

What’s the thought process behind the lineup, stylistically? I know a lot of people see it as a predominately electronic fest, but you guys bring so much variety.

It’s a pretty diverse festival. If you look at our top tend acts this year, there is definitely a handful of electronic acts. You’ve got Axwell ^ Ingresso, DJ Snake, Yellow Claw. On the immediate undercard, you’ve got RL Grime. So those are clearly our big dance acts. But then you also have Jimaroquai, Moon Taxi, Wolfpeck and the Revivalists, the Strumbrellas, and Robert Delonge which are more alternative, funky, indie types. Then Friday, we’ve got Miguel, who, on paper, is an r&b act, but if you’ve ever seen him, he’s more of a like a live act who plays with a sick full band. Then on the undercard that day you’ve got Byrce Vine, and Juice Wrld who is just exploding right now, a local Chicago guy in that emo rap/r&b style that’s so big right now.

On Sunday, we’ve got the return of Jamiroquai to Chicago for the first time since 2005. It’s the Midwest exclusive for them. I don’t know if you’ve ever seen, but he’s a huge 13-piece funk orchestra. It’s gonna’ be crazy and will close out the festival as the final set of the weekend. He’s doing five shows in the states for the first time in 13 years, and the only one that’s not on one of the coasts is us. It’s special to us as event curators that they chose us as their Chicago show.

We really are a diverse festival. I think there was more of an electronic presence early on. But right now it’s not too much of just one thing.

What other areas have you guys tried to improve on in more recent years?

If you look at the schedule, it all makes a little more sense. We’ve really honed in on, like if you’re there for dance music, and you get there at 2 pm you go from this stage to this stage and then you stay at one stage for the last two, or whatever it is. Or on the other hand, if you’re there for jam bands, you start at one stage then go over here for two sets. Basically every hour there’s non-conflicting stuff for you to see. Obviously once you get into a diverse lineup and a diverse crowd, which North Coast is a diverse crowd, inevitably there’s going to be some ‘Why’d you put this person on at the same time as this person?”

So you’re trying not to make it too hard on people who just want to go one day?

No, I think we’ve embraced the fact that it’s a single-day market, and that everyone wants to go to as many festivals as they can. Somebody might not like North Coast’s [lineup] on Friday, but maybe they’re not going to miss it on Sunday, and that’s cool with us.