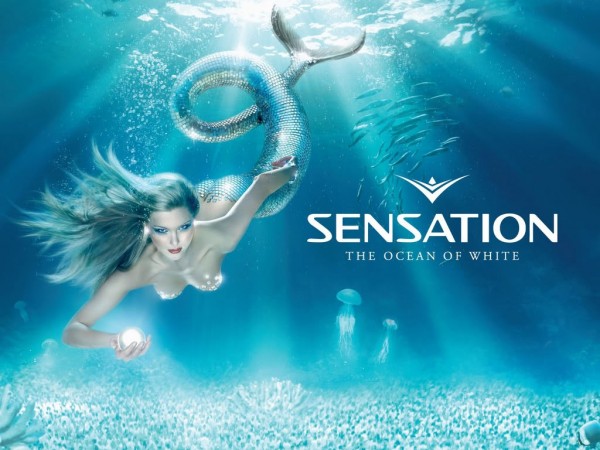 After a successful run of two sold out dates at Brooklyn’s Barclays Center in October 2012 – along with 90 Sensation events for millions of visitors in more than 20 countries since 2000 – Netherlands based ID&T, in conjunction with Goldenvoice, is pleased to announce the inaugural Sensation U.S. tour. Sensation will take place September 14 at Oracle Arena in Oakland, California; October 4 & 5 at MGM Grand Garden Arena in Las Vegas, Nevada; October 11 & 12 atAmericanAirlines Arena in Miami, Florida and October 25 & 26 at Barclays Center in Brooklyn, New York.

Sensation will present to U.S. audiences “The Ocean Of White,” which premiered in Amsterdam, toured all over the world and performed last weekend in front of 30,000 people at the sold out Rogers Centre in Toronto marking the first Sensation Canada. With “The Ocean of White” the arena is transformed into a water world full of mysteries of the unexplored. All of us become part of a greater universe. This wondrous world of nocturnal sea life offers innumerous possibilities. Acrobats shoot from the ceiling, giant jellyfish hover above the dancefloor, as dj’s guide the crowd through uncharted waters of mesmerizing grooves and melodies.

Cities on the Sensation U.S. Tour were selected for the key role they play in shaping the country’s music and nightlife trends. It all kicks off in the San Francisco Bay Area, a region known historically for its independent art and music scenes. Sensation then shifts to the desert for a stay in Las Vegas; the city that defines what spectacle is all about. Heading south, Sensation takes over Miami, the tropical city that’s all about dance music 24/7. It all comes full circle in Brooklyn, the place where it all began for Sensation in the U.S. and ID&T’s home away from home.

White has a deep meaning for Sensation. The white dress code was instituted from the beginning as a way to pay tribute to ID&T (the organization behind Sensation) co-founder Miles Stutterheim who passed away in a tragic car accident. Miles’ funeral became a celebration of his life with guests arriving in white and DJs playing music in his memory. From that point on Miles’ brother and ID&T co-founder Duncan Stutterheim vowed to come together every year and throw a party honoring his life. Regular and Deluxe (VIP) tickets go on sale June 14, 10AM local time. Las Vegas exclusive travel packages including hotel, ticket (Regular or Deluxe) and transfer to and from the venue go on sale June 15, 10AM.

Tickets are available via Sensation.com, Ticketmaster.com, charge by phone (800.745.3000) and selected Ticketmaster outlets. All on-sale hours are local time for each designated city.

Sensation also offers travel packages for those who want to combine an amazing Sensation night with a weekend in Las Vegas. The packages include of one or more overnight stays in a hotel, a regular or deluxe ticket and a transfer to and from the venue. The packages will be available on June 15 at www.sensation.com.

Guests must be at 21 years of age or older to attend Sensation and white attire is mandatory.