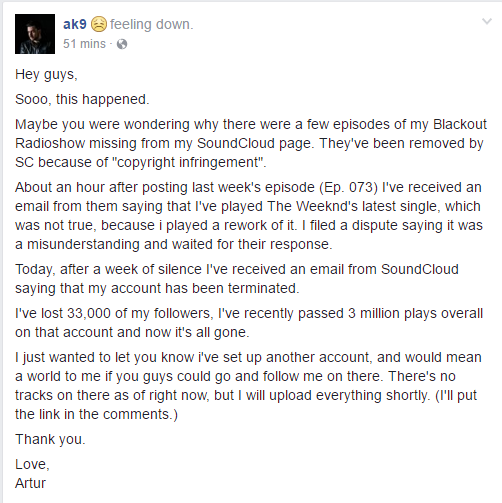 Earlier this week, Soundcloud co-founder Eric Wahlforss released a statement regarding the strictness of copyright-related takedowns on DJ mixes uploaded to the streaming service. After a lengthy period of fear surrounding the threat of possible account terminations, many DJs were relieved to hear that the company’s new agreements would allow for a less stringent atmosphere on the site. According to a new update, however, it appears that unlicensed content in mixes can still result in unexpected takedowns.

The new statement released by Soundcloud attempts to clarify what Wahlforss meant about the new negotiations supposedly made between Soundcloud and industry entities. Behind flowery sentences praising the community aspect of Soundcloud, a note was made that original rights holders will still have the full capability to request takedowns.

“There have been a number of incoming questions this week from our community around creativity and content on SoundCloud. Today, through a number of agreements with labels, publishers and other partners, there are far fewer takedowns of various forms of content – including DJ sets – shared on SoundCloud. It’s clear from our conversations and agreements with the industry and creative community as a whole, that enabling a place for all forms of creativity to live is important, and that SoundCloud can be that place.

With that, it’s important to note takedowns are at the request of creators. While the agreements we have in place across the industry have greatly lessened the likelihood of takedowns, as a creator driven platform, we respect all creators, and therefore we respect the rights of all creators who request to have their content removed.

As always, SoundCloud’s aim is to continue building a unique ecosystem where all forms of expression can live and thrive. The community of creators who gather, share their work and collaborate on SoundCloud is hugely important to us. Creators on SoundCloud continue to be a driving force in pushing culture forward in the world, and we are honored to be the place to help amplify the millions of creative voices who call SoundCloud home.”

Several DJs have already felt the effects of Soundcloud’s unclear, initial statement. One of them, ak9, posted to Facebook on Thursday to describe his own run-in with the still-active takedown system. According to his post, he included a rework of The Weeknd’s newest single in a mix uploaded to Soundcloud last week. An hour after posting, he received an email stating that the site had removed his mix on the grounds of copyright infringement. Because he had included a rework of the original track, he filed a dispute. After waiting an entire week with no response, he found his account to be terminated, along with his 33,000 followers.