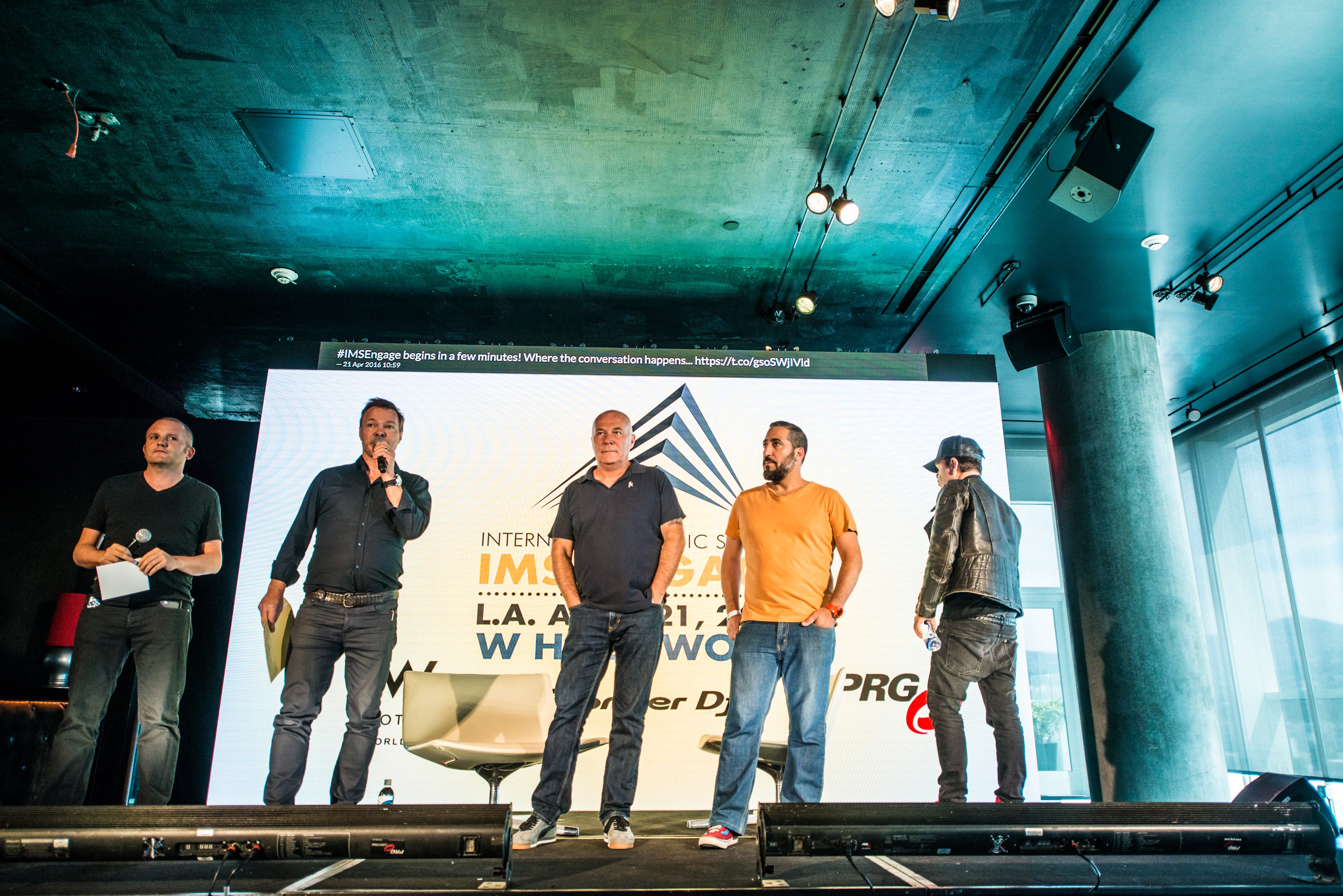 For four years now, IMS Engage has convened in Los Angeles each spring to host insightful conversations between industry leaders in electronic music, film, and technology. In a departure from the standard conference model, IMS opts for two-person panels, allowing for a more organic flow of topics and a true back-and-forth between the speakers.

The pairings for IMS Engage 2016 included legendary radio broadcaster Pete Tong in conversation with Bob Lefsetz, music critic and author of the daily email newsletter The Lefsetz Letter; James Barton, President of Electronic Music at Live Nation, in conversation with agent Lee Anderson, VP East Coast of AM Only; and agent Marc Geiger, Head of Music at WME in conversation with John McFarlane, CEO of music technology and sound system company Sonos. Though the speakers each came to the stage with diverse professional backgrounds, they shared many broad ideas about where the dance music industry is now, where it’s headed, and what the most time-sensitive issues facing music are in 2016.

The “bubble burst” everyone warned about is just a market restructuring

In his opening remarks, Billboard Dance editor Matt Medved referenced a recent Pitchfork editorial which reminded naysayers that “the death of EDM doesn’t mean the death of dance music.” Every conversation reiterated this point. Though EDM as mass media knows it is unlikely to continue dictating the direction of dance music, the Millennial generation raised on the genre has cast their vote with their ticket and music purchases — dance music is here to stay. Aside from Guns ‘N Roses anticipated reunion at Coachella, Lee Anderson noted, the weekend’s biggest and most well-attended performances were electronic, and furthermore, he’s “fooled” if the scene is doomed. Undoubtedly there’s a correction underway in the market now, but at the end of it, the speakers predict unique experiences and quality curation are going to win out. Artists are going to have to change as well, meeting the rising taste of listeners and demand for real DJs shuttering out those who used to get by with a USB alone. Medved closed his remarks with a particularly poignant point, credited to French composer and musical pioneer Jean-Michel Jarre: Electronic music isn’t a genre, it’s a way of composing music. And it’s not ‘dying” for the forseeable future.

The umbrella term “EDM” is a branding issue

Many of us wince when we hear an incredibly vast array of music that can be deemed electronic lumped together and slapped with the uber-generic label “EDM.” It’s rare for an avid electronic fan to use now almost-stigmatized term, but IMS speakers reminded the audience that not everyone reads beyond the umbrella. Corporations and brands, eager to cash in on the almost-limitless potential financial opportunities, don’t understand that EDM doesn’t mean everything — or even anything. Lefsetz phrased it in his trademark brusque fashion: “electronic music is a branding issue. Who gives a s**t what they call it?” Barton, a scene veteran who founded Creamfields almost 20 years ago, concurred: “I missed the part where we started calling it EDM; it’s always been dance music to me.” The speakers were all in agreement that mass media’s recent focus on dance music highlights and amplifies any chaos inside the scene and makes it appear a larger problem in the press than in reality. Whenever there’s discord on the inside, Lefsetz noted, its reported immediately on the outside. We saw this with the reporting on SFX’s bankruptcy and the fall of Robert Sillerman, with Las Vegas club closures, and with Avicii’s retirement announcement. Unsurprisingly, dance music success stories don’t usually get the same coverage.

China is the future, though it has a unique set of challenges

Anyone in dance music booking who isn’t thinking about moving into China isn’t going to be in business very long — at least both Barton and Anderson agreed in their conversation. The goals of promoters and agents are two sides of the same coin, and both see the vast and mostly-untapped potential opportunity in the world’s most populous country. There is an excitement about dance music in China, observed Anderson, that mirrors the climate of the United States six or seven years ago. Unlike the US, or other emerging dance mega-markets like India, however, China has unprecedented levels of state-mandated censorship on a host of cultural activities, and zero tolerance for any publicly expressed anti-government sentiment. Facebook is banned and many other forms of social media don’t exist, so promoters have to be creative about advertising. Being on WeChat is a must, notes Anderson. The task for anyone trying to do a large-scale festival in China, Barton explained, is guaranteeing ticket buyers, which has been a difficult feat thus far.

Electronic music is (finally) moving in a more performance-based direction

Gallant and ODESZA were cited multiple times as some of the artists leading the shift to a performance-driven live experience. Anderson believes it is an agent’s responsibility to play the A&R role for live shows, and sign artists who place more of an emphasis on performance. He cited Tchami’s dramatic Coachella Weekend 1 performance, in which he opened with a 40-person church choir supporting his remix of “Gangster’s Paradise,” as a good example. The difference between electronic artists of the ’80s and ’90s and artists today, theorized Tong, is that producers now are often trained musicians. For example, Kygo is a classically trained pianist, whereas “[Tong] got really good at picking up other people’s records and playing them.” With the aforementioned restructuring of the dance music market, however, and the uptick in demand for some sort of live or performance element in a show, the experts agree that a directional shift is inevitable.

If you’re fully immersed in an industry, several speakers claim, it takes an outsider to shake things up. Daniel Ek, founder of Spotify, was the outsider music needed to revitalize the industry and bring consumption into the 21st century. Prior to the internet era, everyone who followed music knew the #1 record and top charts across genres, but with the proliferation of streaming services and listening platforms, those same charts can fluctuate by the hour, and reflect real-time position changes almost instantly. Obscurity is the enemy today, when there is more money in music than ever before. The power of an artist, posits Lefsetz, is still speaking truth to power — “you’re not going to get truth in a tube of toothpaste or a bottle of gin.” We live in an on-demand era, and Top 40 radio, while still important, no longer satiates listeners or dictates the trends. Now, some argued, strategic placement on a Spotify playlist may be the shortest route to mass exposure. For the first time in 16 years, the speakers concurred, charts are about the music.

James Barton replied to an audience question asking if there were any non-financial barometers of a festival’s success succinctly: “A festival is successful when it makes money. I’ve never seen a festival last long unless it’s turning a profit.” The music business needs to be more attached to the business aspect of what we do, he opined. He painted Ibiza today as an example of an unsustainable revenue model. The political and business decisions on the White Isle are favoring those buying $50,000 tables, rather than passionate 18-year old music fans who almost certainly can’t afford to go any more. A better and more affordable model within Europe is the festival circuit, where many events are lower-priced and accessible within a drive, not a flight. Understandably given their varied backgrounds, not all speakers agreed on the best route to business-centric sensibility. “You guys love the outsiders being outside,” commented Lefsetz, referring to modern dance music’s condescension towards new or uneducated fans, and business entities vying for collaborative opportunities. “You’ve been on the outside for so long, you’re now saying ‘f**k you, you don’t know the difference between house and trance.’” His assessment suggests that some elements of electronic music culture today are diametrically opposed to the genre’s origins as a haven for outsiders, and everyone would benefit from greater inclusion. While his contentious point warrants discussion, it’s worth recalling from time to time as we head into the uncertain yet optimistic future that IMS’ conversations predict.

How Los Angeles became a world-class dance music destination, according to Pete Tong