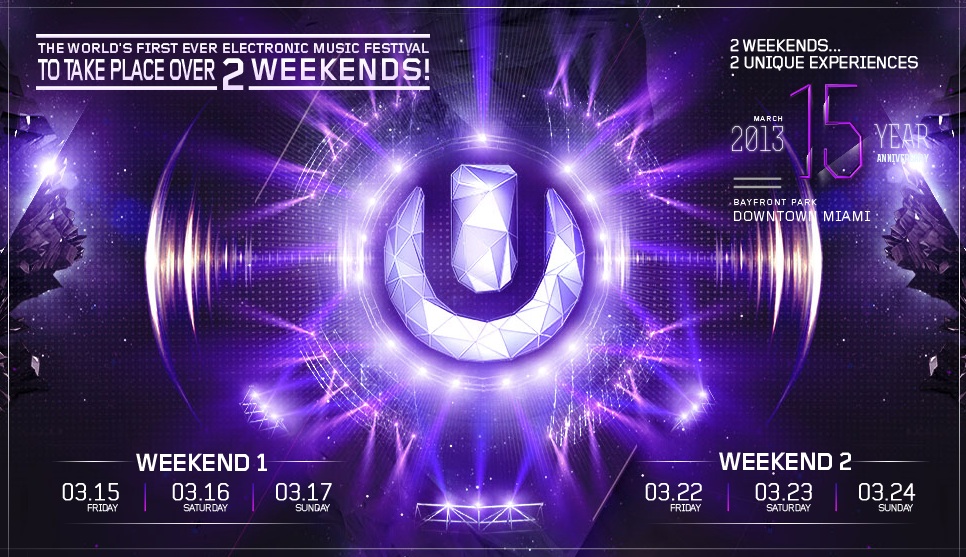 ULTRA MUSIC FESTIVAL has now confirmed it will hold the 15th edition of its
gargantuan event over two three-day weekends March 15, 16 & 17 and March 22,
23 and 24, 2013. This marks the first time ever for a major electronic dance music
(EDM) festival to do so anywhere.

Having teased the world with a provocative countdown clock on its YouTube
channel just days ago, Ultra Music Festival has today, October 15, shocked fans by
revealing this extraordinary news right at the end of an exclusive video on UMF TV,
entitled “RELIVE THE ULTRA 2012 EXPERIENCE.”

The video, created and directed by Final Kid’s very own Charly Friedrichs – director
of the Ultra Music Festival film CAN U FEEL IT – ‘RELIVE ULTRA MIAMI’ showcases 14
minutes of the very finest moments from this year’s event and exclusively previews
the double-delight that’s in store for March 2013.

Following a long weekend of speculation after the world’s premier electronic music
festival launched a LIVE countdown movie on Its UMFTV channel on Friday October
12, fans can now plan ahead for what will be two truly historic weekends in the
festival’s history.

Shrouded in secrecy for months, the team behind Ultra Music Festival – which last
year drew over 165,000 fans – are excited to unveil this news.

“After an extremely successful 2012 edition of Ultra in Miami, and the continuous
overwhelming demand by disappointed fans that were unable to attend because
of the early sell out, we’ve decided to do what Ultra has always consistently done
throughout the years, pioneer, and push the EDM movement forward. So we are
adding a second weekend of Ultra. This is a unique concept from anything ever done
before in our space, as it will be 2 Weekends… 2 Unique Experiences. There are A
LOT of incredible plans and surprises lined up for everyone attending our 15th Year
Anniversary!”

“Being the first ever EDM leaning festival to go two weekends just supports our
position as being the preeminent forward thinking brand in electronica. Although
we are already known as having the best and most relevant talent at our events,
two weekends allows us to present even more and create two separate and distinct
highly unique experiences for our attendees, let alone the impact this will have
on the economy in terms of jobs and other ancillary industries like hotels and
transportation.”

Following a recent study commissioned by Ultra Music Festival and carried out by
the Washington Economics Group, revealed the extent to which the festival boosts
the city’s yearly economy and news of the ‘double header’ weekend won’t solely
be music to the ears of electronica fans. In fact in 2012, alone the three-day event
injected upward of $40 million directly into the Miami-Dale economy ($79 million
if factoring in indirect and induced spending). With over 60% of visitors hailing
from outside Miami-Dade, the local fiscal benefits that this news brings will be
unprecedented.

Tickets for both weekends go on sale to the general public on Wednesday, October
17, exclusively from www.ultramusicfestival.com