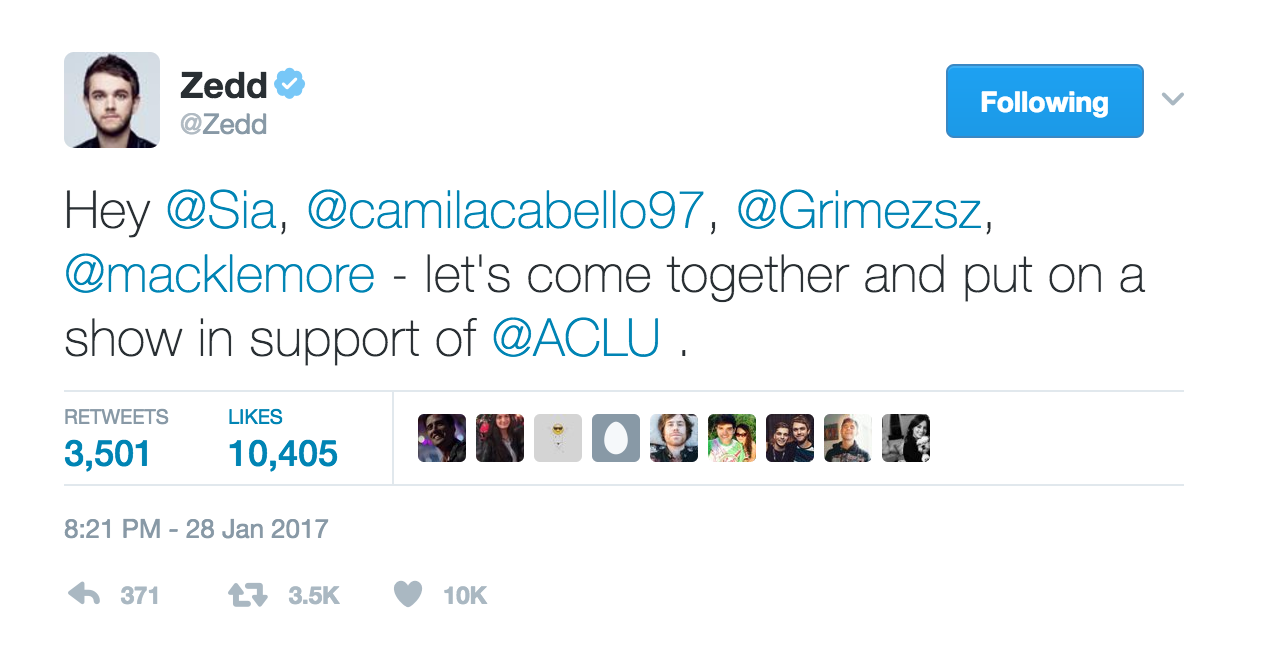 On January 27, President Trump issued an executive order declaring a 90-day ban on people entering the country coming from Syria, Iraq, Iran, Somalia, Sudan, and Yemen. The order additionally requires the Department of Homeland Security to conduct a 30-day review to determine countries provide “adequate information” for its citizens to receive visas to enter the country, and suspended the entrance of all refugees into the United States for four months. Trump’s sweeping decree was met with immediate opposition internationally, followed quickly thereafter by the American Civil Liberties Union (ACLU) filing a lawsuit against the president which has led to a federal judge ordering a stay on Trump’s order.

Numerous artists have come out in vehement support of the ACLU’s opposition to the current U.S. administration, with Zedd being so moved that he has vowed to take action. In a tweet, the producer called on Sia, Macklemore, Camila Cabello, and Grimes to join him in a proposed benefit concert to support the ACLU’s efforts.

After Zedd’s tweet began to spread and gain media traction, the artist doubled down on his intent to hold the concert. Zedd went on to denote his immigrant status; the producer born in Russia, raised in Germany, and currently resides in the United States courtesy of a visa. While no show is official yet, the producer is adamant that concert will come to fruition, declaring in another tweet, “I WILL make it happen.”

Zedd’s commitment to following through on his impassioned causes was demonstrated in 2016, when he made good on his offer to produce music for Kesha during her highly publicized dispute with Dr. Luke and Sony, resulting in their “True Colors” collaboration.